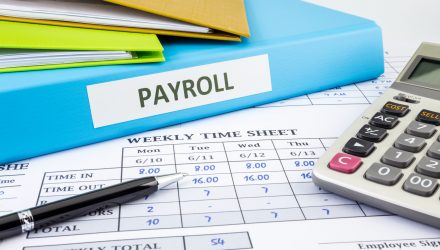 Stocks and index ETFs surged once again on news that nonfarm payrolls rocketed by 4.8 million in June as the unemployment rate dropped a bit lower to 11.1%, thanks to the U.S. continuing its reopening from the coronavirus pandemic, the Labor Department said Thursday.

Economists queried by Dow Jones had projected a 2.9 million gain and a jobless rate of 12.4%, so investors championed the better data, which was released a day earlier than normal on account of the July Fourth holiday.

The June jobs growth is easily the largest single-month gain in U.S. history and designated a substantial improvement from the 2.7 million in May, which was revised up by 190,000.
President Trump rejoiced over the data, noting at a news conference, “Today’s announcement proves that our economy is roaring back. It’s coming back extremely strong.”
Moreover, he highlighted a steep drop in the unemployment for Blacks that went from 16.8% to 15.4%. “These are historic numbers,” the president said.

Futures markets reacted positively to the report, surging more than 400-points in the Dow to show a gain at the open. Markets continue to hold those gains in early afternoon trade.

“The 4.8 million rise in non-farm payrolls in June provides further confirmation that the initial economic rebound has been far faster than we and most others anticipated,” said Michael Pearce, senior U.S. economist at Capital Economics. “But that still leaves employment 9.6% below its February level and with the spread of the virus accelerating again, we expect the recovery from here will be a lot bumpier and job gains far slower on average.”

Jobs were equally balanced at 2.4 million apiece for full- and part-time workers, with Citigroup economists stating that the concentration of job additions suggests that hiring will continue to grow, even if June might mark the zenith. They noted that present projections are a bit biased by weekly claims data however, which are distorted because workers that were contracted part-time can still get benefits.

“A second consecutive large upside surprise to hiring relative to consensus confirms our view that the reopening rebound would be much more robust than most expected a couple of months ago,” Citi economist Andrew Hollenhorst said in a note. “We are particularly encouraged by the composition of hiring, which shows potential for further large gains in manufacturing, construction, and healthcare jobs, which are relatively insulated from social distancing.”