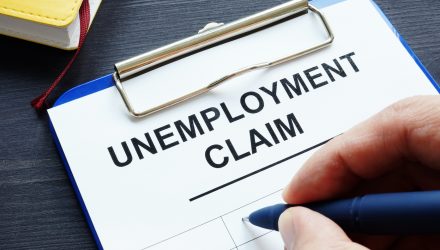 After several green days in a row, markets are pulling back today following less than stellar initial claims data.

The Dow Jones Industrial Average is basically flat on Thursday, after declining in overnight trading. The S&P 500 and Nasdaq are both showing losses on the day, as much of the market is still mired in red following higher initial claims data and struggling tech shares.

Filings for unemployment insurance claims reached 1.877 million last week, potentially suggesting that the economy may be cresting the worst part of the coronavirus-related jobs crisis while unemployment levels are still perilously higher than desired.

Economists surveyed by Dow Jones were expecting 1.775 million new claims, so the higher figure spooked markets, which dropped after the data was released, but have since recovered some. However, the Labor Department’s figure demonstrated a drop from the previous week’s higher revised total of 2.126 million. Meanwhile, filings under the Pandemic Unemployment Assistance program hit 623,073.

It was good news in some ways, as this was the first time the government’s weekly jobless claims report came under 2 million since the week ended March 14. Yet, economists are still reluctant to say everything is fine.

“Even as states reopen, claims in the millions are an indicator that the economic pain of the COVID-19 crisis is still acute,” said Daniel Zhao, senior economist at job placement site Glassdoor.

Continuing claims, which is often a better illustration of how many Americans remain unemployed, totaled 21.5 million, a gain of 649,000 over the past week, also worse than Wall Street projected.

The insured unemployment rate, which is a simple measure of those collecting benefits compared with the total labor force, also climbed 0.5 percentage points to 14.8%.

All this data comes following comments from Moody’s Analytics economist Mark Zandi yesterday that “the Covid-19 recession is over.” Moody’s assists ADP in putting together the monthly private payrolls report. “That would make it the shortest recession in history,” Zandi said. “It will very likely be among the most severe.”

For now markets will wait for a slew of economic data Friday including non-farm payrolls, unemployment rate, and consumer credit.