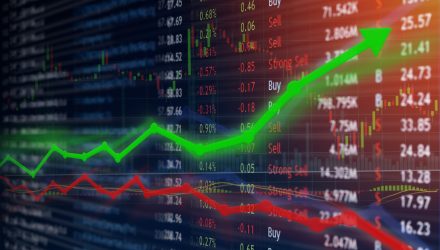 After rallying back Wednesday from a steep fall over the past week, stocks and index ETFs are giving up some of those gains on Thursday in choppy trade, as stock indexes look to roll over to the new futures contract.

Markets have been a roller coaster due to increasing volatility and contract rollover. Indexes are set to roll over to the new contract today, which forces traders to move out of their positions as volume diminishes in the expiring contract, although they still have roughly a week to fully exit positions. The Dow Jones Industrial Average lost 0.7% before recovering somewhat. The S&P 500 also slipped 0.7% and the Nasdaq Composite was down 0.4% after surging as much as 1.4% but has since flattened out as of 130PM EST.

“It’s a tricky market,” said Arian Vojdani, investment strategist at MV Financial. “You look up one second and the market’s down. You look down the other second and you’re back up.”

“Investors would be amiss to try and trade on this right now,” said Vojdani.

On Wednesday the S&P 500 notched its best day since June, while the Nasdaq rebounded from correction territory after a sell-off for major tech stocks plummeted the market three days in a row. Stocks have been testing the recent breakout above the all-time highs in February, attempting to assert dominance over the coronavirus-induced bear market selloff. Now analysts are leery that it may take some time for a retest of those fresh all-time highs to occur.

“Wednesday witnessed a partial recovery … but we do believe that the switchback ride of the last 5 weeks will have placed at least a temporary cap on the powerful advance that has taken place since March,” Michael Shaoul, chairman and CEO of Marketfield Asset Management, said in a note. “This is not to say that the damage is irreversible, particularly if key support at the 50‐day moving average manages to hold in the coming sessions, but it will probably take a few weeks before the September 2nd high can be fully tested or surpassed.”

The three-day drop was driven by concerns that there may be a tech bubble, as the tech sector has driven the Nasdaq to record highs despite the coronavirus pandemic’s damage to the economy. Many feel the recovery was premature and that the pullback did not go deep enough, with Duquesne Family Office CEO Stanley Druckenmiller telling CNBC on Wednesday morning that the market was in an “absolute raging mania.”

But with the market recovering so quickly from the March lows, other analysts still see the potential for spectators who missed the furious run-up to join the party.

“People go to cash in droves — and it’s immediate, it’s a big wave. They come back in drips. So as it drips back in, that cash is going to look for more attractive valuation opportunities. So I think it’s natural that it would look for things that have been a little more beaten down or some of the stocks that haven’t driven us up to this point,” Young said on “Closing Bell.” “But I don’t think we’re in a place now where you have to start selling rallies and taking exposure off the table.”