You are at:Home»Featured»Stock ETFs Relinquish Gains Amid Capitol Protest And Lockdown 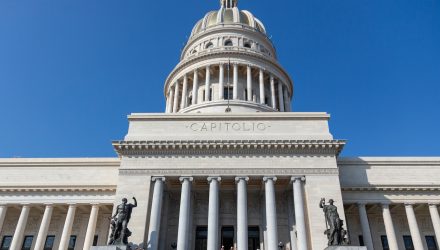 After approaching all-time highs, stocks and index ETFs are tumbling this afternoon, amid wild volatility, and even anarchy, as Vice President Mike Pence was ushered out of the Senate and the U.S. Capitol Complex was placed under lockdown as a result of an external security threat, while Trump supporters rioted outside the building.

Major stock ETFs are attempting to avoid relinquishing their gains on Wednesday afternoon as investors weigh the runoff election possibilities, and digest the anarchy in the Capitol. The SPDR Dow Jones Industrial Average ETF (DIA), SPDR S&P 500 ETF Trust (SPY), are still positive on the day, while while the Invesco QQQ Trust (QQQ) is down over 0.25% as of almost 3PM EST.

A member of the Senate told NBC News that Vice President Pence and Sen. Charles Grassley, the president pro-tem, have been taken to a secure location. The Senate doors are closed and locked, and senators have been warned to avoid heading toward the doors.

Coming After A Coup

The move came amid lawmakers conveying to commence the historic process of tallying the Electoral College votes and formally declaring President-elect Joe Biden the winner.
“This is a coup attempt.” Rep. Adam Kinzinger, an Illinois Republican tweeted in the midst of the chaos.

Earlier, President Trump, during a rally, incited thousands of his supporters to march on the Capitol to protest the confirmation of Biden’s victory. The chanting crowds subsequently rushed the Capitol, attacking police and frightening trapped lawmakers.

The Cannon House Office Building and Madison Building were evacuated earlier in the day. Occupants that were evacuated from Cannon, on the House side of the Capitol, had been given clearance to re-enter the building.

Meanwhile, inverse index ETFs like the Direxion Daily S&P 500 Bear 1X (SPDN), that had been down on the day are quickly gaining ground, amid the activity.