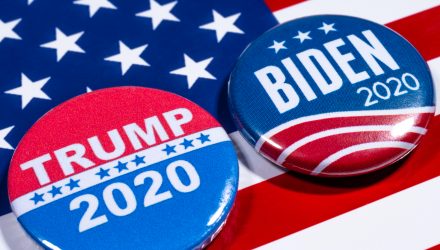 Stocks and index ETFs are climbing for a fourth consecutive day on Thursday amid optimism that the election of a new U.S. president will soon be confirmed.

The Dow Jones Industrial Average gained 1.62% amid the news, although is off its best levels, which were higher by over 600 points. Meanwhile, the S&P 500 advanced 1.8%, and the Nasdaq Composite climbed more than 2%.

After some concerns at the start of the month, recent stock gains are now targeting the major indexes for their most robust weekly rally since April, which is further fueling stock ETFs. The Dow Jones Industrial Average had climbed over 6% this week, while the S&P 500 and Nasdaq rallied 7% and 8.4%, respectively, over the same time period.

With the majority of sectors are green on Thursday, Big Tech is shining once again. Facebook, Amazon, Netflix, Microsoft and Apple were all up more than 2%, spurring the iShares Core S&P 500 ETF (IVV) up 1.62% as well. With a possibly divided government in the works, investors drove tech up, optimistic that as taxes will remain steady, antitrust scrutiny could be more balanced, and a contentious battle with China may be more subdued.

As former Vice President Biden has inched closer to the number of votes necessary to become president, investors seem to be responding to the potential for closure in this historic and suspenseful post-election day process, and to the possibility of a split Congress, which is historically beneficial for markets.

“Markets are reacting very positively to the fact that a great deal of the election uncertainty has passed. Not all of it, but at least the worst outcomes seem to have been avoided. Markets hate uncertainty, and this is likely to be a tailwind for a while,” said Brad McMillan, Chief Investment Officer at Commonwealth Financial Network.

Stocks and index ETFs have performed well for the week, despite the uncertainty, with the Dow closing Wednesday’s session with a gain of 367.63 points, or 1.3%, having nearly triple that gain earlier in the session. The S&P 500 advanced 2.2%, while the Nasdaq Composite jumped 3.9%.

“It looks likely that we’ll see a split Congress, which, based on history, has been the preference of the stock market,” said Lindsey Bell, Chief Investment Strategist at Ally Invest. “You can see this expectation being priced into the market [Wednesday] with health care, communication services and technology stocks are leading the market.”

Democrats were predicted to maintain control of the House, while a reversal of control in the Senate became increasingly unlikely.

“With no blue wave, we are likely to see the Senate remain very closely divided, which will constrain the policy options of whoever wins the presidency. That probably rules out any substantial activity on taxes, as well as limiting any actions to control the major tech firms,” Commonwealth Financial Network’s McMillan added.

Despite investors’ optimism that the election will go smoothly, some strategists noted that in the event of a contested election, stocks could potentially suffer a precipitous drop, something that may be driving gold and silver higher recently, as they are often used for hedging political and economic uncertainty.

“More than anything, the market is looking for a peaceful transition of power. Social unrest or a contested election could trigger a significant increase in volatility,” said Don Calcagni, Chief Investment Officer of Mercer Advisors.