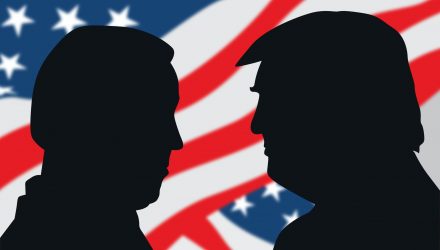 Despite a still uncertain presidential election, U.S. stocks and index ETFs surged once again on Wednesday, fueled by the technology sector.

The Dow Jones Industrial Average popped 610 points, or 2.2% in early Wednesday trading, while the S&P 500 advanced 2.8%. The market is being driven by the tech-laden Nasdaq Composite, which rocketed 3.9% as investors leapt back into their 2020 comfort zone trade.

Major stock ETFs are making significant gains on Wednesday as well. The SPDR Dow Jones Industrial Average ETF (DIA), SPDR S&P 500 ETF Trust (SPY), and Invesco QQQ Trust (QQQ) are all advancing just before 11AM EST, with the QQQ climbing over 4.2%. The iShares Core S&P 500 ETF (IVV) gained 2.49% as well, amid optimism that Republicans may fare better than expected, according to analysts.

“I think the big news for the markets right now at least as it looks preliminary is that there’s not going to be a blue wave, which is generally supportive for markets,” said Mike Lewis, Managing Director of U.S. Equity Cash Trading at Barclays, on CNBC’s “Squawk Box.” “I think that the outlook going forward for markets is this is going to be more about policy and the Fed than it’s going to be about politics, which is a good thing for markets.”

Prior to the rally however, overnight futures contracts for the Dow and S&P 500 struggled for a bit after President Donald Trump tried to claim victory ahead of what still amounts to millions of votes that have yet to be counted.

“We were getting ready for a big celebration. We were winning everything, and all of a sudden it was just called off,” the President said. “We’ll be going to the U.S. Supreme Court, we want all voting to stop.”

“We don’t want them to find any ballots at 4 o’clock in the morning and add them to the list,” he added.

While many of the major states have been called already, key swing states Wisconsin and Pennsylvania could still take days to calculate. Meanwhile, the former Vice President expressed optimism over his chances of winning the election.

“We believe we’re on track to win this election,” Biden said to supporters in Delaware overnight. The candidate said the winner could be known Wednesday morning but it could take a little longer.

While shares of major tech-related companies such as Amazon, Apple, and Microsoft all up at least 3%, with Facebook rocketing 7%, and Alphabet surging over 6%, bank shares struggled. The Invesco KBW Bank ETF (KBWB) fell 3.28% in early trading as a result.

In addition to tech movement, investors may be seeing the Republicans maintaining a foothold on the Senate as a positive for the group, as higher capital gains taxes from a Democrat congress could stymie high-growth stocks like tech.

“It appears investors may be satisfied with at least half a loaf (Republican Senate) and no tax increase, knowing they have a ‘Fed put’ if fiscal assistance is slower in coming,” Stifel Head of Institutional Equity Strategy Barry Bannister said in a note Wednesday. “This favors Growth stocks over Value near-term.”

For the present time, however, investors will still need to be patient until election results are determined.