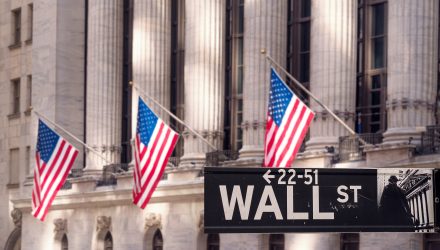 Stocks and index ETFs inched higher on Monday, as investors prepared for a cluster of corporate earnings and Federal Reserve meeting comments.

The Dow Jones Industrial Average traded slightly above breakeven, while the S&P 500 limped another 0.2% higher. Meanwhile, the Nasdaq Composite advanced 0.6%.

There are a plethora of potential market movers this week, as investors and traders are awaiting a packed earnings schedule, an FOMC meeting, the revealing of President Biden’s “American Families Plan,” and additional inflation data.

Roughly 30% of the S&P 500 is set to offer earnings guidance to investors this week. Some of the most anticipated reports include Big Tech companies such as Apple, Microsoft, Amazon, and Alphabet, which could have a dramatic effect on ETFs like the Invesco NASDAQ 100 ETF (QQQM).

The majority of earnings releases thus far have been positive. With 25% of the companies in the S&P 500 reporting first-quarter results, 84% have reported a positive per-share earnings surprise and 77% have bested revenue estimates.

“Growth is still improving and liquidity is still abundant,” Andrew Sheets, chief cross-asset strategist at Morgan Stanley, said in a note. “The bull market remains intact, and I struggle to see the type of calamity that defined the summers of 2010, 2011, 2012 and 2015,“But a harder, choppier, more range-bound summer does seem likely.”

If 84% remains the final percentage, it will tie the mark for the highest percentage of S&P 500 companies reporting a positive EPS surprise since FactSet began tracking this metric in 2008.

Yet, even with the robust earnings reports, investors seem a bit gun-shy about jumping into equities and stock ETFs at these lofty levels.

Some of the reticence to purchase stocks could be attributed to data that arrived Monday revealing that new orders for capital goods rebounded less than expected in March. The Commerce Department said orders for non-defense capital goods excluding aircraft gained 0.9% last month, falling short Dow Jones estimates of a 2.2% increase.

Last week, markets were spooked by news reports that President Biden may increase the capital gains tax on wealthy Americans to help fund his proposed plan for the country. The president is expected to detail the $1.8 trillion plan, including spending proposals aimed at worker education and family support, to a joint session of Congress Wednesday evening.