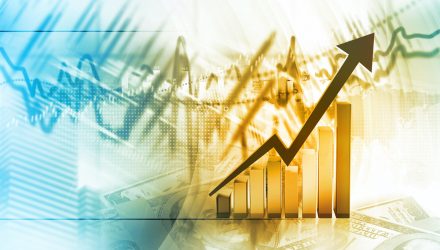 After a tepid but positive trading day Monday, that started with a gap higher from last week, stocks and index ETFs continued the rally on Tuesday, aided by a rebounding Nasdaq and robust economic data.

With much of the market showing gains, the Dow Jones Industrial Average added 117 points or 0.4%, while the S&P 500 advanced 0.9% and the Nasdaq Composite climbed 1.5%, as tech stocks outperformed.

Tech stocks like Apple and Microsoft are building on gains made Monday, and climbed 1.4% and 1.6%, respectively, while Netflix advanced an even more impressive 3.3% and Facebook traded higher by 2.2% to help boost the ProShares UltraPro QQQ (TQQQ) 5.11% Tuesday. Meanwhile, the banking sector languished, with Citigroup, US Bank, and JP Morgan all showing losses, and the iShares U.S. Regional Banks ETF (IAT) down 1.4%.

This places China “on track to return to its pre-virus growth rate before the end of the year,” said Julian Evans-Pritchard, senior China economist at Capital Economics. “Retail sales surpassed 2019 levels for the first time since the COVID-19 outbreak, while investment and output growth continued to strengthen” last month.

Investors were also driven by positive economic data in the U.S., as the Empire State Manufacturing index reached a robust 17 for September, rebounding from a print of 3.7 in August. Economists polled by Dow Jones had only projected the index to come in at 7.

Coronavirus developments were another source of optimism for market players, who were treated to news that AstraZeneca is resuming its phase three trial in the United Kingdom and Pfizer CEO Albert Bourla claimed over the weekend that the company should be prepared with key data from its trial for regulators by the conclusion of October.

Although the S&P 500 has already exceeded that level, LPL Financial increased its year-end target for the S&P 500 to a range of 3,450–3,500 on Monday, according Jeff Buchbinder, an equity strategist at the firm. The move was prompted by tech mergers and excitement over the tech space.