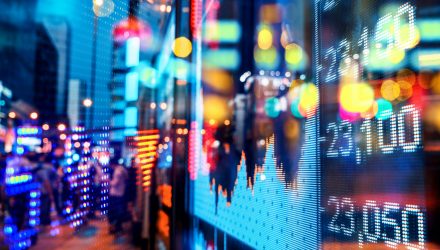 Stocks and index ETFs are attempting to hold afternoon gains, as the S&P 500 vacillated in volatile trading Thursday after a rally to record highs stalled out.

The S&P 500 fell 0.2% lower, following two straight days of losses, before rallying back to a 0.32% gain in mid- afternoon trading. The Dow Jones Industrial Average rallied as well after being close to flat. Meanwhile, the Nasdaq Composite dipped 0.8% as tech companies swooned, but has since climbed to near breakeven on the day.

Major stock ETFs are mixed to higher on Thursday as well. The SPDR Dow Jones Industrial Average ETF (DIA) and the SPDR S&P 500 ETF Trust (SPY) are slightly higher, while the Invesco QQQ Trust (QQQ) is down 0.52% as of 3 PM EST.

In the energy sector, crude oil prices declined about 4.5% Thursday amid demand concerns and fresh coronavirus pandemic lockdowns. The S&P 500 energy sector fell over 2% as a result, while the United States Oil Fund (USO) declined 3.59%.

Stocks and index ETFs were also fragile after Federal Reserve Chairman Jerome Powell hinted at eventually starting to remove the stimulus that has boosted the market during the pandemic, something investors have come to depend on.

“As we make substantial further progress toward our goals, we’ll gradually roll back the amount of Treasurys and mortgage-backed securities we’ve bought,” Powell told NPR’s “Morning Edition.” “We will very gradually over time and with great transparency, when the economy has all but fully recovered, we will be pulling back the support that we provided during emergency times.”

The three major averages are headed for a losing week, with the S&P 500 and the Dow dropping 1% each, while the Nasdaq has fallen more than 2% this week, after two of the indexes notched fresh highs last week.

“The weakness in technology stocks is undeniable, but it likely won’t be a straight line down for the sector and there will be zigs and zags along the way,” said David Bahnsen, chief investment officer at The Bahnsen Group. “Tech stock valuations are too high and are screaming for a correction.”

Pressure on equities hasn’t eased up despite a reprieve from climbing bond yields. The 10-year Treasury yield fell below 1.6%, dropping for a fourth day after the rate hit a 14-month high last week.

Meanwhile, a better-than-expected reading on weekly jobless claims may have also put pressure on equities, ironically enough. The Labor Department said first-time claims for unemployment insurance totaled 684,000 for the week ended March 20, lower than an estimate of 735,000 from economists surveyed by Dow Jones.

“The signs of strength from today’s jobless claims read may actually have a perverse effect on the broader market,” said Mike Loewengart, managing director of investment strategy at E-Trade. ”Meaning that if we continue to see the labor market make strides, this could translate into pressure on equities and on the Fed to reassess its accommodative stance.”