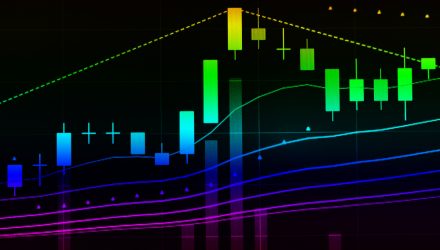 Stock ETFs Attempt To Pare Down Losses After Wednesday’s Decline

Stocks and index ETFs are dipping downward on Thursday after a dramatic drop in the previous session, as most sectors are struggling amid weaker-than-expected jobless claims data and continued stimulus uncertainty.

The Dow declined 0.21%. The S&P 500 fell 0.23%, with only the Nasdaq Composite advancing marginally, buoyed by Netflix and Apple, which each climbed about 1%. Stocks tumbled in the prior session after making fresh all-time highs, with the S&P 500 losing nearly 80 points or over 2% as the other indices fell Wednesday and overnight.

While House Speaker Nancy Pelosi was optimistic about stimulus negotiations, telling reporters Thursday that bipartisan negotiations were making “great progress” toward additional government aid package, she noted that lawmakers were still at odds over a liability waiver for businesses.

Meanwhile, the House passed a government funding extension Wednesday that would allow the federal government to remain operational through Dec. 18, as lawmakers continue negotiations for a more significant relief package.

Disheartened by the latest U.S. unemployment data, investors have driven stocks and ETFs lower, as initial weekly jobless claims spiked to 853,000 last week, beating a Dow Jones estimate of 730,000. That is the largest number of initial claims filed since September and the first time since October that they surpassed 800,000.

“Given the recent behavior of initial claims, we will likely see further increases in continuing claims going forward,” wrote Thomas Simons, money market economist at Jefferies. “Evidence has been building indicating that claims hit an inflection point in early November due to rising COVID case numbers and forced the imposition of social distancing policies that really hurt the service sector of the economy.”

Prior to the decline Thursday, projections for a strong economic recovery and optimism over the Pfizer-BioNTech vaccine rollout in the U.K. helped fuel the major averages to record highs.

Some financial pundits are concerned however, as Commerce Street Capital CEO Dory Wiley feels investor should be leery, referencing the 90% of stocks on the NYSE that are trading above their 200-day moving average, an indication that valuations might be overdone.

“Timing the market is not always well-advised and paring back can miss out on some gains the next two months, but after such good returns in clearly a terrible fundamentals year, I think taking some profits and moving to cash, not bonds, makes some sense here,” Wiley said.