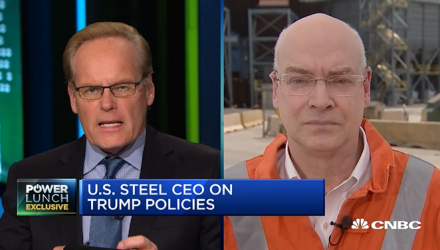 Steel ETF Down 8 Percent from High in February

After a 25 percent tariff imposed on steel imports by U.S. President Donald Trump and his administration in March, the VanEck Vectors Steel ETF (NYSEArca: SLX) has dropped 8 percent after reaching a high of $51.37 in February.

After the March tariff on steel imports, the Trump administration expanded them on June 1 by removing temporary country exemptions for members of the European Union, Canada and Mexico.  Based on data released by the American Institute for International Steel, steel imports to the United States surged 12.1 percent in April to 3.76 million net tons.

Through the first four months of 2018, steel imports were up 1.2 percent year-over-year to 12.45 million net tons–a byproduct of the March tariffs, according to the American Institute for International Steel. The Trump Administration announced the tariff in March after a Commerce Department investigation revealed that global imports of steel pose a threat to national security, prompting an April stockpiling prior to the June 1 exemption removals.