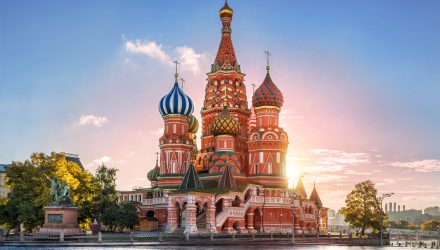 Even with the White House unveiling fresh sanctions against Russia, some investors are embracing the VanEck Vectors Russia ETF (NYSEArca: RSX), the largest Russia exchange traded fund trading in the U.S.

RSX has trailed the MSCI Emerging Markets Index over the past year. The ETF and Russian stocks slipped in March after President Vladmir Putin won another term, news that some market observers position Putin to possibly be Russia’s leader for life. In late March, President Trump expelled 60 Russian diplomats from the U.S.

Of those being expelled, 48 of the alleged intelligence agents work at the Russian embassy in Washington and 12 are posted at the United Nations in New York. The expulsion comes about 15 months after the Obama administration expelled 35 Russian diplomats because of meddling in the 2016 US presidential election.

RSX and other Russia ETFs hold some companies that could be affected the new sanctions.