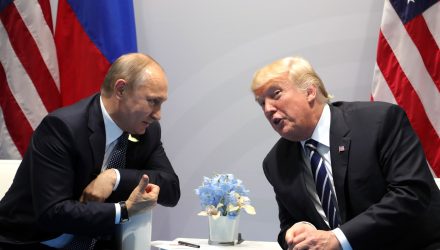 Russia ETFs are reacting to President Donald Trump’s expulsion of 60 Russian diplomats the US identified as intelligence agents and the closure of a Russian consulate in Seattle.

The expulsion comes as a response to the poisoning of former Russian spy Sergei Skripal and his daughter, Yulia, in Salisbury on March 4.

Of those being expelled, 48 of the alleged intelligence agents work at the Russian embassy in Washington and 12 are posted at the United Nations in New York. The expulsion comes about 15 months after the Obama administration expelled 35 Russian diplomats because of meddling in the 2016 US presidential election.

According to CNN Politics, “The actions came less than a week after Trump spoke with Russian President Vladimir Putin to congratulate him on his reelection. Trump did not raise the nerve agent attack during the call, and senior administration officials said the two leaders have not spoken since.”