The Future of Humanity and Artificial Intelligence
You are at:Home»Robotics & AI»Five Ways to Prevent Robots From Losing Value Over Time 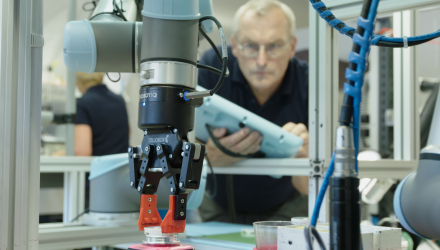 Five Ways to Prevent Robots From Losing Value Over Time

However, if companies aren’t careful, these high-tech machines could lose value over time through a process called depreciation. Here are five ways to minimize depreciation of your cobot.

Cobots lose value as they become outdated. When budgeting for robotics, businesses should prioritize cobot providers that sell hardware and software updates.

For some businesses, a given software update could make a cobot even more useful than before. Similarly, some companies sell new attachments or other physical components, increasing a cobot’s possible applications. The cobot then gains value instead of losing it.

Adaptability means more than changing with new technology—it can mean performing different tasks. Some cobots are so flexible that workers can prepare them another task in mere minutes.

For instance, Atria Scandinavia is a food packaging plant that uses two cobot models to boost efficiency. Each assembly line now prepares about 228 products per hour. Even better, while it once took six hours to convert assembly lines for different items, it now takes 20 minutes.

2. Have a Long-Term Mindset

Research suggests that people from developed nations are at risk of losing their jobs to robotics by the early 2030s. Luckily, cobots are meant to supplement human labor instead of replacing it.

Yet cobots will retain value only if buyers are forward thinking about how they will interact with workers. Otherwise, cobot owners may realize the machines’ benefits aren’t sustainable for their unique work environment.

A survey of 1,500 respondents from all sectors found that when companies harnessed the potential of machine-human collaborations, 71 percent saw a tenfold improvement in at least one business process.

This highlights the benefits of creating workflows with cobots and workers alike instead of just replacing workers with robots.

Moreover, robot maintenance skills are in greater demand than ever. Since 2012, there has been a 231-percent increase in these jobs, and maintenance technician is the most desired position in the sector.

When companies harnessed the potential of machine-human collaborations, 71 percent saw a tenfold improvement in at least one business process, according to one study.

Depreciation happens in other industries too. For instance, new cars and equipment are often affected by the depreciation curve: their value depreciates significantly the first year, then levels off.