You are at:Home»Robotics & AI»6 Industries Improved by Robotic Automation 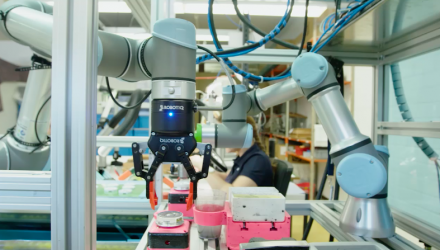 Analysts say without help from automation, the automotive industry – including prominent companies such as General Motors – would have had trouble bouncing back from the Great Recession.
Robotic automation helps auto-making plants deal with labor shortages. In many facilities, robots work next to humans and help people get more done in less time. The bots also have built-in safety features that stop them from moving whenever humans get too close.

Consumers have an ever-growing demand for smartphones, flat-screen TVs, earbuds, and tablets, among other gadgets.

China, in particular, has capitalized on robotic automation in the electronics manufacturing sector. Between 2013 and 2014, the number of robots working in that industry more than doubled in China.

In Germany, Beyerdynamic, an audio accessories manufacturer, faced the daunting goal of increasing productivity on the factory floor by 50 percent over four years.

It implemented the Robotiq 2-Finger Gripper and Wrist Camera to pick up speakers and place them in a dedicated area where the pieces get sprayed with glue. A second robot, the Universal Robot UR 5, handles the glue-spraying task.

Together, the two robots increased the production rate by 50 percent. Plus, human workers at Beyerdynamic report that despite the factory’s limited floor space, it’s easy to work alongside the robots.

They now have plans to train the specialized machines for other responsibilities, such as inserting screws and handling the final assembly of products.

Indeed, one of the advantages of robots in factories is that they’re becoming capable of great task-to-task variability, which makes them immensely useful for companies that want to cut costs.

Health facilities have also benefited from automated robots. In the San Francisco Bay area, one hospital is using dozens of robots, called TUGs, to transport supplies and medications.