You are at:Home»Robotics & AI»Former Google Chariman Discusses Future of AI 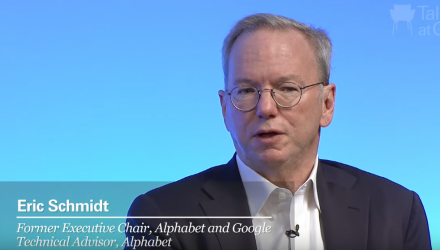 “Instead of programming a computer to do something, the computer learns from the data to do something,” said Schmidt.  “It’s important to understand where the strength is and where the limits are. The key strength is you can deal with data sets where you actually don’t understand very much about the subtle structure, but you can still come very close to what you would think of as accuracy.  The great weakness is that it’s not algorithmically provable to be one hundred percent correct.”

Schmidt said the greatest improvement in neural network technology has been in speech recognition and photo recognition.  This is due to the fact that there’s a margin for error in terms of accuracy where the human interpreting the results can understand the data even if it’s not error-free.

A hot topic in voice recognition and language processing technology is its application in the healthcare industry.  Schmidt noted that voice recognition will be the primary user interface when it comes to health care providers interacting with patients during a medical assessment.

“In the future, what will happen is there will be a microphone and a speaker, and they’ll be a Bluetooth headphone or equivalent with a care provider which will be feeding them a complicated medical regime for them to think about,” said Schmidt.