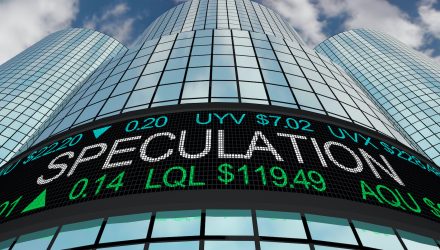 In what has become increasingly common, retail traders using social media platforms have driven up stocks and corresponding ETFs. The latest target of the Reddit traders has been Clover Health, which saw triple digits at one point on Tuesday.

Clover Health is a Medicare insurance start-up that went public via Chamath Palihapitiya’s SPAC. Clover Health went public Jan. 8 but was founded in 2013 by healthcare entrepreneur Vivek Garipalli and is based in Nashville, Tennessee. The outfit provides private health insurance and Medicare plans in eight U.S. states.

The stock surged over 100% on Tuesday after gaining an incredible 32% in the previous session. The stock last traded up 78%, above $20 per share, after trading below $8 last month.

Like other similar retail trader targets, gossip about Clover burgeoned on Reddit’s WallStreetBets forum, which now has over 10 million participants. Clover went viral in the notorious chatroom on Tuesday, according to QuiverQuant.

Similar action has been seen from Reddit traders in stocks like AMC Entertainment, which rocketed 110% in the past week as traders piled into shares and call options of the movie theater chain.

It appears that a possible short squeeze could be in the works for Clover Health, which has 43.5% of its float shares sold short, according to data from S3 Partners. That is in contrast with the roughly 18% short interest in AMC. When a heavily shorted stock suddenly sees pressure from buyers, short sellers must buy back shares and close their short position to limit losses, driving the stock even higher as a consequence.

Retail traders on Reddit are urging one another to augment the short interest in Clover in a ploy to squeeze out short sellers.

“This looks like the perfect setup for a combined short and gamma squeeze. I see no reason why CLOV couldn’t reach the same price point as AMC did last week (>$70). It might even go higher than that,” one trending Reddit post said Tuesday.

Earlier this year, Clover shares plummeted after short seller Hindenburg published a scathing report that called the company a “broken business.” Clover said in February that it even was sent a notice of investigation from the Securities and Exchange Commission and that it intends to cooperate. In this vein, the current push higher seems largely unfounded.

Speculative retail sellers have been increasing their bearish positions as the stock bounced back from its preliminary pullback following the SEC investigation news. Over the last month, short interest has climbed almost 25%, according to S3.

The plan to squeeze shorts appears to be gaining traction so far, as short sellers are underwater $465 million in mark-to-market losses amid Tuesday’s rally, according to S3. Only time will tell if they are forced to liquidate those positions at losses.

GameStop, the target of similar short action in a January trading mania, climbed 17% on Tuesday, while AMC Entertainment gained 6%.

GameStop also surged 25.57% last week, accounting for nearly all of the stock’s May gain of 26%.

Lingering enthusiasm for GameStop shares is beneficial to some exchange traded funds, including the Invesco S&P SmallCap Consumer Discretionary ETF (PSCD). However, meme stocks, including the video game retailer, aren’t for the faint of heart given their continuing volatility.

GameStop was been a favorite on the WallStreetBets Reddit chat room, as investors successfully drove the stock over 300% higher. Yet, shortly after, the surging stock sank over 20% in a Bitcoin-like display which included multiple trading halts. The stock tumbled as rumors of broker restrictions began to spread, with outfits like Interactive Brokers and Robinhood curbing transactions for heavily shorted names. AMC Entertainment also plummeted 50% after rocketing a massive 300% earlier this year.

The SEC noted Monday that it is observing the wild trading in certain stocks, looking to ascertain if there have been “any disruptions of the market, manipulative trading, or other misconduct.”