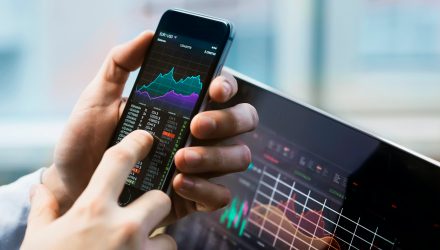 Retail Brokers Are Booming During Quarantine

With millions of Americans working from home or quarantined due to the coronavirus pandemic, the retail stock trading industry has been booming. Major online brokers such as Charles Schwab, TD Ameritrade, E-Trade, and Robinhood have seen an explosion in trading activity, as eager investors flock to markets, hoping to make quick money while facing economic hardships and unemployment.

E-Trade’s trading activity and new accounts rocketed higher in the second quarter amid this influx of retail investing activity that was inaugurated during the coronavirus market disaster.

The retail outfit, who is scheduled to be acquired by Morgan Stanley in the second half of this year, reported Thursday a record 1.01 million daily active revenue trades in Q2, representing more than tow and a half times its daily trades last year. This is up from 657,000 daily trades in the first quarter.

Other major online brokers are witnessing a similar surge in new accounts and trading activity during the coronavirus recession as small investors rushed into the market after the precipitous February decline, noticing the subsequent rebound as an opportunity.

With a confluence of factors affecting the economy and markets, not since the 1990s have so many retail traders taken to day trading, with their influence contributing to market fluctuations lately.

As the coronavirus has driven many workers to shelter-in-place, a lack of activities such as sport-betting, and other traditional speculative activities may be driving investors to play the stock market instead.

While professional investors exited the stock market amid the coronavirus pandemic, sports bettors and bored millennials have climbed aboard the retail train, encouraged by zero dollar commissions, hopes for a v-shaped recovery, and a lack of other outlets like sports betting, which were shuttered due to the Covid-19 pandemic.

“For a gambler, investing has a ton of similarities,” said Barstool Sports founder Dave Portnoy, who has begun streaming his day-trading sessions for an audience that normally consumes sports betting content.

The esports world has also been a hotbed of activity during the pandemic. Roundhill BITKRAFT Esports & Digital Entertainment ETF (NERD) has been on a tear since March, having gained more than 52% since then.

The rapid growth for the broker brings its year-to-date retail asset flows to $31.9 billion and account growth to 656,000.

“We generated our highest period ever of revenue from trading-related activity, which more than offset the quarter-over-quarter pressure on net interest income, given the Fed’s recent rate cuts to near zero,” E-Trade CFO Chad Turner said in the release.

For investors looking to take advantage of the moves in the retail brokerages, the iShares US Broker-Dealers ETF (IAI) is one fund to consider. IAI contains Goldman Sachs, E-Trade, TD Ameritrade, and a number of other well-known brokerages, and is one of the only funds of its kind.