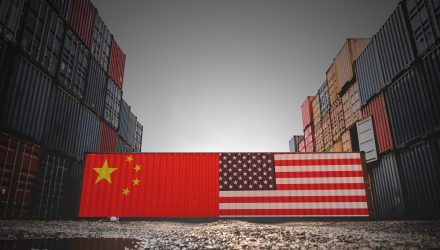 President Donald Trump’s tweets have been the focus of speculation and market timing since before his presidency even began. But with the recent trade talks and trade tensions with China, analysts are concerned now more than ever, that companies with major Chinese exposure could suffer greatly from a U.S. trade war with China.

Consumer Confidence has long been an important measure of market complacency and looming stock market volatility.

According to market intelligence company SPGlobal recently, “Consumer confidence soared to an 18-year high in February, on the tailwinds of the passage of the most sweeping tax rewrite in over 30 years at the end of 2017. But now, with U.S. President Donald Trump’s ramp up of protectionist rhetoric and heightened concerns of a global trade war, the optimism has begun to diminish. The Conference Board Consumer Confidence Index declined to 127.7 in March, from the high of 130.0 in February, with many pointing to President Trump’s tariffs as playing a major role for the drop off. Companies have already started to examine the potential impact to their supply chains and are reevaluating the way they conduct business. Although the implementation details of the President’s tariffs have yet to be provided, we went ahead and evaluated the levies’ potential market implications.”

A variety of companies with extensive Chinese exposure are likely to suffer losses during a prolonged trade war. These companies run the gamut from consumer discretionary businesses and technology companies to energy enterprises.

Panjivi Inc, a research company added, “The targeting [striking]of China’s duties is significantly more focused than those introduced by the U.S., with 106 categories compared to 1333 in America’s section 301 duties. They are also more focused in terms of products, with the top three products accounting for 71.7% of total product coverage. Those include aircraft (HS 8802.40, worth $14.05 billion, or 26.3% of the total, soybeans (HS 1201.90 worth $13.96 billion) and midsize engine cars (8703.23, $10.32 billion). The inclusion of soybeans is particularly notable given that the promotion of imports were a part of the package of trade enhancements announced when President Trump visited China in November 2017.”