You are at:Home»Relative Value Channel»This ETF Suggests There May Be A Tidal Change Coming 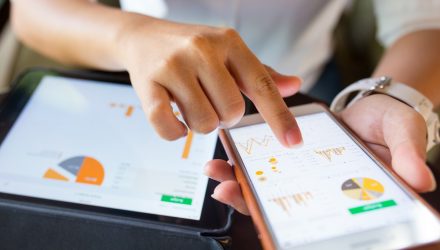 This ETF Suggests There May Be A Tidal Change Coming

Ian Young October 25, 2019
While the S&P 500 has been struggling with reaching new highs, after climbing back from lows earlier this month, amid economic and political tension and news headlines, one index has been quietly making new highs on the busiest day of the earnings season.
Whenever the SPDR S&P 500 Value ETF (SPYV) index has hit a record after 200 days of no new highs, it has always rallied six months later, according to a note from the research firm SentimenTrader.
According to analysis from Todd Gordon of TradingAnalysis.com, the long-term trend between growth and value is beginning to shift, while growth, which has been predominant over this period of time since 2008, could now be trumped by value.
One of the largest holdings in the value ETF is Apple, which has been breaking new highs while the rest of the market remains subdued.
Two ETFs that are often used as a barometer for growth and value are the iShares S&P 500 Value ETF (IVE), which is used for value stocks, and the iShares S&P 500 Growth ETF (IVW), which represents a large broad swath of growth offerings.
As the global economy slows, valuation could become more significant, according to experts.
“From an absolute standpoint it’s great that value is reaching an all-time high, but it’s a relative game. As we all know value has under-performed growth for quite some time now, and those investors waiting for this reversion to the mean, has almost been like waiting for Godot, for value to catch up to growth,” said John Petrides of Tocqueville Asset Management on CNBC.
“However though, valuation will matter at some point. It’s only a matter of time with the slowing global economy that those growth momentum stocks that are not earning any money, that are losing money, but are growing at a top line strong, when growth becomes fearful, investors will turn their back on that group very aggressively, and there’s often a hurry; they don’t wait for anybody. So now is the time to start rotating your portfolio if you’re overweight growth, and start adding to value,” added Petrides.
For more market trends, visit ETF Trends.