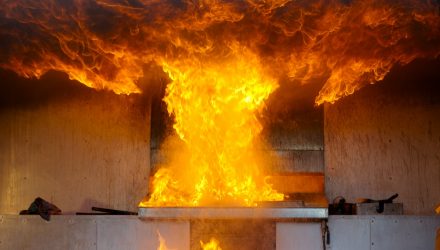 A sequence of explosions early Friday ripped through a Philadelphia Energy Solutions (PES) gasoline refinery, the East Coast’s largest refinery, generating shock waves for miles and raining debris on nearby neighborhoods, just as the busy summer driving season was commencing.

Firefighters contained the conflagration fairly quickly, but it is still burning and has not yet been declared under control. Officials lifted a shelter-in-place request for residents, who are allowed to pass through nearby Platt Bridge.

PES said there were three separate explosions in a unit that produces alkylate, which is designed to boost gasoline octane.

“We have not determined the product that was burning, but we believe it was mostly propane,” PES said in a statement. Earlier in the day, Deputy Fire Commissioner Craig Murphy had claimed the fire at first was believed to have been fed by butane. Cosmo Servidio, EPA head for Mid-Atlantic, explained later that a propane tank was the cause of the fire. “No other tanks were affected,” he said.

Physical structures weren’t the only items that were shaken by the blasts however. The gasoline futures market jumped 3.5% Friday morning. Because RBOB futures reflect New York harbor prices, they are especially affected by an outage in a refinery in Philadelphia, a key regional refining hub.  Wells Fargo said in a note to clients Friday that it could see pump prices on the East Coast elevating 3 cents to 5 cents per gallon as a result of the explosion.

While refining stocks moved higher after the explosion, with Valero Energy rising 2%, Phillips 66 increasing 1% but later retreating and HollyFrontier rising 1%, analysts do not believe there will likely be long term reverberations for the gas market.

Tom Kloza of Oil Price Information Service said he does not see the outage at the Philadelphia Energy Solution refinery will be a major problem for the well supplied U.S. gasoline market, despite a number of Gulf coast refineries in extended maintenance. He said the explosion impacted the unit that makes premium gas.

Investors are actively watching futures markets and associated ETFs such as USO and XLE, to see how the blast will govern gasoline and oil market prices.