You are at:Home»Relative Value Channel»Cyclical ETFs Could Get A Boost, Says Goldman Sachs 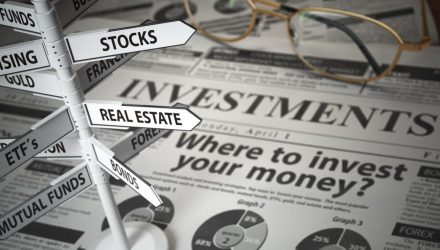 Cyclical ETFs Could Get A Boost, Says Goldman Sachs

U.S. stocks have been on a tear lately, and Goldman Sachs now feels that the U.S. economy is ready to bounce back with certain stocks poised to reap the most upside from the economic recovery.

According to Goldman, cyclical stocks, those generally associated with strong economic growth, have led the record-setting stock market rally in the past three months. While the S&P 500 surged about 8% during the period, cyclical stocks have outperformed their defensive counterparts, staging a return of about 12%, Goldman noted. The investment bank prognosticates that this trend will continue given there is a rebound in the U.S. economy.

“The equity market is anticipating an acceleration in US economic growth during the coming months,” David Kostin, Goldman’s chief U.S. equity strategist, said in a note Friday. “Investors who want to capture further cyclical upside can improve risk-reward by narrowing their focus to select cyclical stocks.”

In its research, Goldman screened Russell 1000 stocks for equities with high economic sensitivity but depressed valuations. The bank uncovered 24 stocks that could outperform the market and other cyclicals if economic growth continues to improve.

Retail stocks have had especially impressive performance, with shares of Kohl’s rocketing a massive 27% higher in the past three months, while Urban Outfitters’ stock also has surged more than 48% during the period.

With the Federal reserve having cut interest rates recently, and the trade war becoming less of an irritant, Goldman sees that there may be a decent chance for continued economic bolstering.

“Our economists believe that tariffs have peaked and that the drag on US GDP attributable to the US-China trade war is now abating,” Kostin said. “Their base case is that tariff levels on imports from China remain flat in 2020.”