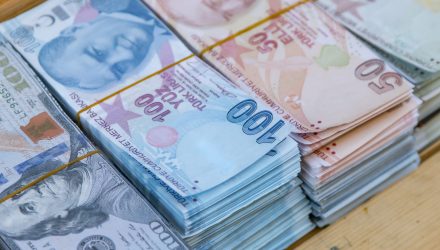 With the Turkish lira slumping to record lows against the U.S. dollar, the iShares MSCI Turkey ETF (NasdaqGM: TUR) was punished last Friday, putting the only US-listed ETF tracking Turkish stocks on pace for its one-day loss ever.

TUR, which tracks the MSCI Turkey Investable Market Index, is over a decade old. Compounding the fund’s woes was commentary from President Trump regarding new trade tariffs against Turkey.

“The Turkish lira is plummeting for a variety of reasons most notably the central bank’s refusal to raise interest rates to support it as well as a recent ramp up in U.S. sanctions,” said Alec Young, managing director of global markets research at FTSE Russell. “Currency weakness is fueling inflation and making it more expensive for Turkey to repay its large foreign currency denominated debt.”

By midday Friday, TUR had seen “roughly 13,000 puts and 4,800 calls change hands — 14 times the average intraday pace. Today’s options volume is now on pace to hit an annual high, and top the current peak set on June 4, when about 26,000 puts and 12,000 calls were exchanged,” according to Schaeffer’s Investment Research.

The weakness in the lira has in turn diminished the ability of companies to repay foreign currency-denominated debt, fueled inflation and pressured the central bank to hike rates, which would further hamper growth.