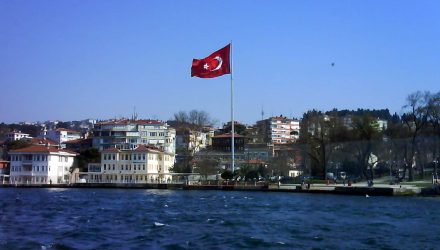 The Dow Jones Industrial Average fell over 150 points as geopolitical issues in Turkey ravaged the U.S. capital markets, while the Turkish lira continued to devalue as U.S. President Donald Trump ratcheted up tariffs on aluminum and steel amid growing dissention between the two countries.

“This is a classic, instinctive reaction in the market,” said Quincy Krosby, chief market strategist at Prudential Financial. “Stocks are down while gold and Treasurys are getting a bid.”

“The currency issue in emerging markets, in Turkey, is nothing new. This is just exacerbated,” Krosby added. “Historically, you’ve seen central banks act to ease these types of situations. The goal for them is to minimize collateral damage.”

I have just authorized a doubling of Tariffs on Steel and Aluminum with respect to Turkey as their currency, the Turkish Lira, slides rapidly downward against our very strong Dollar! Aluminum will now be 20% and Steel 50%. Our relations with Turkey are not good at this time!

Related: The Challenges Ahead for Industrial ETFs

Other indexes were down in the early trading session with the Nasdaq Composite falling over 40 points and the S&P 500 was down just under 20 points. Earlier this week, the S&P 500 was just 0.8 percent away from reaching an all-time high of 2,872.87, which was established on Jan. 26. Additionally, the Nasdaq was also within 1 percent of a record high and the Dow was over 4.2 percent away from reaching its own all-time high.

Through the end of last week, the S&P 500 was up 24 percent on earnings in the second quarter on a year-over-year basis. However, ongoing trade wars between the U.S. and China have disrupted the path to new highs.