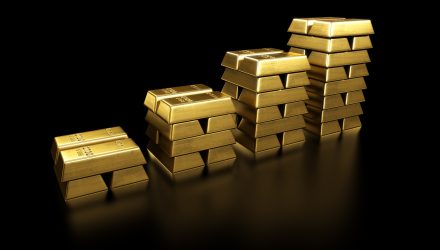 Elevated equity market volatility in October prompted investors to revisit gold and the related gold ETFs, according to new data from the World Gold Council (WGC).

As stocks tumbled last month, investors sought refuge with funds such as the SPDR Gold Shares (NYSEArca: GLD), the largest gold-related ETF on the market; and the iShares Gold Trust (NYSEArca: IAU). A stabilizing U.S. dollar and attractive valuations on gold were among the catalysts boosting the yellow metal in October.

“Holdings in global gold-backed ETFs and similar products rose in October by 16.5 tonnes(t) to 2,346t, equivalent to US$1.0bn in inflows,” said the WGC in a report out Tuesday. “This was the first monthly inflow in four months. Positive gold price performance for the month (+2.3% in USD) was a key driver of inflows in North American and European funds. Global assets under management (AUM) rose by 3.1% in US dollars relative to September.”

The safe-haven status of gold, which has been questioned at various points this year, appears to have been renewed over the past couple of days amid heightened equity market volatility. The recent rally in gold comes amid extreme short positioning in the yellow metal and could force traders that short the yellow metal to cover those positions, likely adding to bullion’s near-term upside. Some market observers are forecasting more upside for gold as the fourth quarter moves along.

“Flows in North American gold-backed ETFs were positive, led by inflows in US-listed funds and counterbalanced by softer outflows in Canadian funds. Europe also had inflows, driven primarily by UK-listed funds, with nearly half the European inflows coming from currency-hedged funds,” said the WGC. “Chinese-listed funds experienced extreme flows across funds, resulting in outflows equivalent to 8% of assets. This was the second straight month of significant outflows, driven in part by profit-taking from some investors as the gold price in yuan rose by as much as 5% in October.”