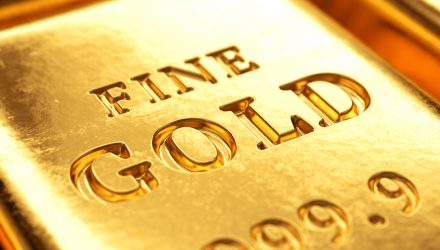 There is still plenty of work to be done, but gold exchange traded funds, including the iShares Gold Trust (NYSEArca: IAU), gained more than 2% in October. That October upside helped gold snap a six-month losing streak.

A stabilizing U.S. dollar and attractive valuations on gold were among the catalysts boosting the yellow metal in October.

“Over the very long term gold and the U.S. money supply, measured by M2, tend to move together,” said BlackRock in a recent note. “Changes in gold prices have roughly equaled changes in the money supply, with the ratio tending to mean-revert towards 1. By the end of September, this ratio had fallen to below 0.7, the lowest since 2005. When the ratio is low, defined as 25% below the long-term average, the average return during the subsequent 12-months is 15%.”

The safe-haven status of gold, which has been questioned at various points this year, appears to have been renewed over the past couple of days amid heightened equity market volatility. The recent rally in gold comes amid extreme short positioning in the yellow metal and could force traders that short the yellow metal to cover those positions, likely adding to bullion’s near-term upside. Some market observers are forecasting more upside for gold as the fourth quarter moves along.

What’s Next for Gold Investing?

Importantly, gold prices have recently stayed above the mid-August lows and a move close to $1,300 per ounce could trigger more buying. Rising interest rates have also stymied gold this year, but real rates are stabilizing, which could benefit bullion.

“Besides the dollar, the biggest challenge for gold in 2018 has been rising real rates, i.e. interest rates after inflation. Higher real rates raise the opportunity cost of an asset that produces no income. Between January and early October, real 10-year yields advanced by 50 basis points. However, since then, real rates seem to have temporarily peaked near the levels reached in 2013,” according to BlackRock.