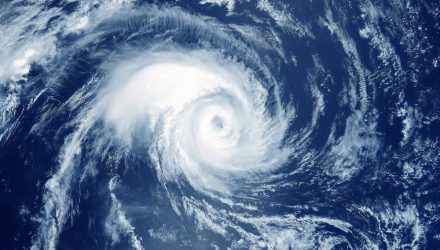 Natural gas prices and related exchange traded funds jumped Thursday as trading braced for the potential fallout from a tropical storm building off the Gulf Coast.

The National Hurricane Center was monitoring a weather phenomenon in the west-central Caribbean that it predicted had a 90% chance of becoming cyclone formation over the next 48 hours, which could potentially threaten coastal states along the Gulf of Mexico over the weekend, the Natural Gas Intelligence reports.

“The system is expected to enter into the Gulf of Mexico Friday night and continue moving northwestward toward the central or northwestern U.S. Gulf Coast, potentially bringing dangerous impacts from storm surge, wind and heavy rainfall to portions of the coasts of Texas, Louisiana, Mississippi, Alabama and the Florida Panhandle by Sunday and Monday,” the National Hurricane Center said.

Natural gas futures also received a boost after the United States Energy Information Administration reported on a 29 billion cubic feet gain in domestic supplies of natural gas for the week that ended August 20, which was smaller than average analyst expectations of an increase of 37 billion cubic feet, according to a S&P Global Platts survey.

“It’s a tricky build to predict due to cooler week/week temperatures but with much lighter week/week winds,” NatGasWeather said of this week’s EIA print. “We expect a build of 41-42 Bcf but with the potential it misses lower.”

Looking ahead, NatGasWeather forecasted cooling degree day losses from both the American and European models, with cooler temperatures now anticipated next week as tropical weather looms over the Gulf Coast. Specifically, temperatures remained “hot and bullish” through this weekend before national natural gas demand is expected to recede to “much lighter” levels by next week.

“Impacts from the tropical cyclone are likely to be more bearish than bullish” with liquefied natural gas (LNG) export facilities sitting in the storm’s path, creating “the potential to drop LNG feed gas by a few Bcf/d,” NatGasWeather said.

The anticipated tropical cyclone “could wreak havoc by bringing widespread power outages, storm surge and flooding rains, thereby killing demand but also potentially production” given the “greater concentration of oil and gas refineries and pipelines along the Texas and Louisiana coasts,” NatGasWeather added.