You are at:Home»Multi-Asset Channel»Emerging Market Bond ETFs Could Rally Again, After A Break 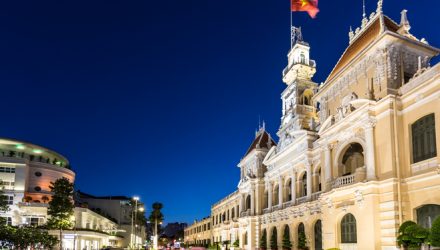 Emerging Market Bond ETFs Could Rally Again, After A Break

Buoyed not only by declining Treasury yields in the U.S. but a spate of interest rate reductions by emerging markets central banks as well, developing world debt and the related ETFs are surging this year.

For example, the iShares J.P. Morgan USD Emerging Markets Bond ETF (EMB), the largest ETF in this category is higher by about 10% year-to-date.

A stabilizing dollar outlook also diminishes the danger of taking on emerging currency exposure, which has historically acted as a large source of volatility for investors investing in local-currency-denominated emerging market debt. While a Fed rate cut helps, some emerging markets central banks are expected to lower rates, too. Brazil, Chile, Mexico, India, and Thailand are among the developing economies that have recently trimmed borrowing costs.

“Investors in emerging market sovereigns have been richly rewarded this year, even relative to other sectors of a surging fixed-income market,” reports Craig Mellow for Barron’s.

“Emerging markets have had an ace in the hole in the form of duration: 12 years instead of 3.5. Roughly speaking, bond prices are calculated by yield compression times the number of years a holder can expect to benefit from that change,” according to Barron’s.

Mexico, Indonesia, Saudi Arabia, Russia and Turkey are EMB’s top five geographic exposures and at least four of those five countries are credible candidates to lower interest rates over the near-term.