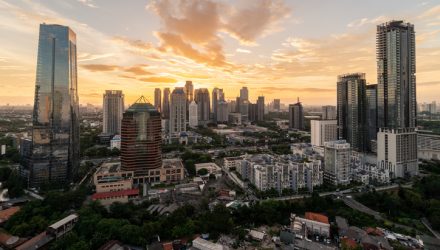 The Federal Reserve on Wednesday lowered interest rates by 25 basis points, a move that along with another rate cut or two, is seen benefiting emerging markets bonds and exchange traded funds, such as the iShares J.P. Morgan USD Emerging Markets Bond ETF (EMB) and the Invesco Emerging Markets Sovereign Debt ETF (PCY).

A stabilizing dollar outlook also diminishes the danger of taking on emerging currency exposure, which has historically acted as a large source of volatility for investors investing in local-currency-denominated emerging market debt. While a Fed rate cut helps, some emerging markets central banks are expected to lower rates, too. Brazil got in the act yesterday, paring the Selic rate by 50 basis points.

PCY, the first smart beta fixed income ETF launched in 2007, is based on the DBIQ Emerging Markets USD Liquid Balanced Index, which tracks the potential returns of US dollar-denominated government bonds issued by more than 20 emerging-market countries, weighted equally.

With an effective duration of 9.32 years, PCY holds longer duration bonds (up to 30 years) that should react more sharply to a rate cut than the shorter end of the interest rate spectrum, as of July 22, 2019. This approach offers diversified exposure across emerging markets and can result in excess returns over the market value weighted counterparts.

The world is awash in negative-yielding bonds, boosting the allure of emerging markets debt.

“Investors have been piling into the high-yielding securities as the Fed’s signal to ease policy amid faltering global growth saw the amount of negative-yielding bonds around the world rise to $14.1 trillion,” according to Bloomberg.

For more news and strategies in fixed income, visit ETFtrends.com.