You are at:Home»Featured»More Woes For The United States Oil Fund ETF 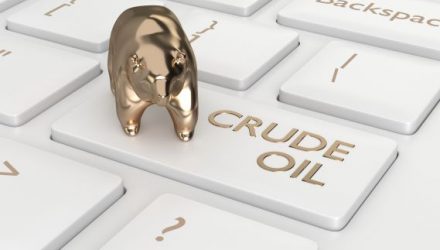 The United States Oil Fund (USO), declared another revision to the fund’s makeup on Wednesday as it scrambles to maintain investor interest following a 77% decline this year.

USCF, the manager of the fund, noted that it will execute a one-for-eight reverse share split for USO that will go into effect after the close on April 28.

A reverse stock split is typically used by the corporation to consolidate the number of outstanding shares of stock into fewer, proportionally more valuable, shares, attempting to raise the value of the stock. While there are no material changes to the fundamentals, the cosmetic change that takes place in a reverse split frequently signals a company is in distress.
After opening positive, shares of USO dropped more than 10% and the ETF is trading around $2.53 as of 2 pm EST.

USO had already been struggling, however, as Crude oil shares suffered a tremendous drop Monday, eventually reaching negative territory for the first time in history, as futures slipped to -$37 a barrel amid oversupply and limited storage capacity.

As part of the crude oil carnage, the United States Oil Fund, which is designed to follow the front-month futures price of oil, was briefly halted Tuesday before the opening bell. When the fund resumed trading, it plunged 17% despite the fund not holding any of the May contracts in question.

The halt came after USCF, the manager of the fund, said that it was temporarily suspending the creation of new shares of the ETF, as so much new money had entered the fund in the past week that it reached the limit on the number of shares authorized by the SEC.  The fund has applied to raise the number of shares available dramatically, but this usually-routine process will likely take several days.

Without the ability to create new shares, USO now trades like a closed-end fund.  Any new buyers will likely have to pay a premium to gain access (or seek their exposure in competitive funds).

Hayman Capital Management CIO Kyle Bass, who successfully anticipated and effectively bet against the U.S. subprime mortgage crisis, has condemned commodity-focused ETFs concentrating on retail investors, calling the reverse split “garbage” in a tweet. Bass also has a short position in some of these ETFs.

After vaporizing billions from unweary investors this week alone, the retail killer USO begins the day at a 36% premium to its current asset value of $2.06. Reverse splitting garbage continues to give you garbage.#USOIL #USO #supercontango pic.twitter.com/D2pqPpISjW

Warren Pies, Energy Strategist at Ned Davis Research, is also concerned about the issues with USO.

“At best, they are expensive ways to gain programmatic futures exposure,” he said of commodity-based ETFs on Monday. “At worst, they are designed to implode. Still, money continues to flow into the USO ETF. As of last week, USO’s assets reached an all-time high of more than $5 billion. To reiterate: In this environment, USO is a train wreck. Stay away,” he said.

For investors who are looking to stay invested in crude oil, which has rebounded considerably on Wednesday, up more than 21%, a favorite of many longer-term oriented advisors is the Invesco DB Oil Fund, DBO.