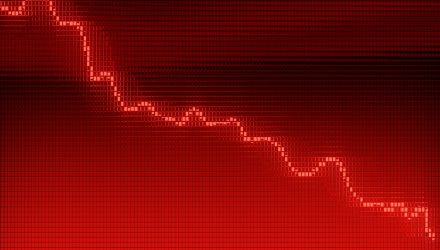 After a long holiday Memorial Day weekend, U.S. stocks fell to their lowest levels in weeks again on continuing fears of the ongoing trade war with China. The market gave back all of it early gains to close on the lows, with volatility increasing as investors fear that declining interest rates signal a weakening economy, and are a harbinger of a prolonged global decline.

Both stocks and treasuries rates took a dive, with the yield on the benchmark 10-year note falling to around 2.26%, its lowest level in 19 months. Yields normally move inversely to prices.

President Donald Trump said on Monday that the U.S. was “not ready” to make a deal with China, before adding he that he expected a deal in the future. Trump also stated that tariffs on Chinese imports could increase “substantially,” further inciting fears among investors.

“Trump is playing a Game of Thrones with both foreign and domestic adversaries,” said Ed Yardeni, president and chief investment strategist at Yardeni Research. “Since he is the President of the world’s greatest economic and military power, he claimed that he will consummate lots of deals with them that will greatly benefit the US in short order. The results have been mostly disappointing so far.”

Much of the market’s technology sector was affected by the news. The VanEck Vectors Semiconductor ETF (SMH) fell 0.9%, driven largely by a 3.1% decline in Micron Technology. Intel and Qorvo also dropped 2.2% and 2.5%, respectively. Caterpillar, another barometer for trade, fell almost 1%.

On top of comments from President Trump, a Chinese official also implied that China might use its dominion over the rare earth metal market to control trade relations with the United States. Rare earth metals are used to make several products, including long-lasting batteries, magnets, and lighting.

“You look at it and say, Here’s another card they can play,” said Art Hogan, chief market strategist at National Securities. “It’s all he said, Xi said right now. And we’re going to have to hear it form the top … It’s hard to glean anything new because we didn’t learn anything over the weekend.”