You are at:Home»Equity ETFs»Marijuana ETFs Take a Hit as Volatility Drags Down Cannabis Stocks 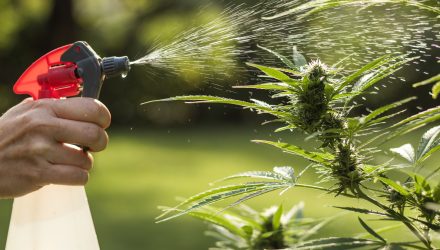 It’s been a week since the full legalization of marijuana in Canada, but cannabis stocks and exchange-traded funds (ETFs) alike are taking a hit as volatility in the major U.S. indexes continue to roil the markets.

The Horizons Marijuana Life Sciences Index, which trades on the Toronto Stock Exchange, was down 1.51% as of 12:00 p.m. ET, while the U.S. exchange-traded ETFMG Alternative Harvest ETF (NYSEArca: MJ) was down slightly at 0.24%. Stocks like Tilray (TLRY) and Canopy Growth Corporation (CGC) took losses to the tune of 4.18% and 2.44%, respectively.

TLRY saw a frenzy of investor interest last month, which skyrocketed its shares to over $250 before selling off to its current level of $115.  MJ, the first U.S.-listed ETF to target the cannabis and marijuana industry, is up 23.58% year-to-date and 30.35% within the past year, according to Yahoo! Finance performance numbers.

In the past five days, however, as sell-offs in the Dow continue to fuel volatility, MJ has been hit harder after initially muting the effects of October’s major sell-off near the beginning of the month.

HMMJ experienced its largest drop since it started trading in April of last year and has fallen over 20% within the past month alone.

MJ seeks to provide investment results correspond generally to the total return performance of the Prime Alternative Harvest Index, which is concentrated in the pharmaceuticals and tobacco industries. The serendipitous growth of these cannabis stocks may force large pharmaceutical companies to partner with these companies to effectively hedge against the marijuana medicine industry invading their market share, according to Tilray CEO Brendan Kennedy.