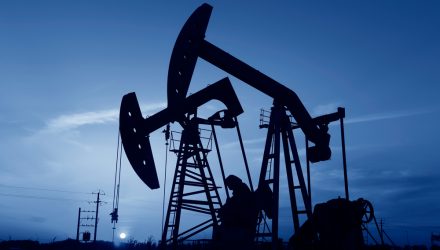 Traders Keep GUSHing Over This Oil and Gas ETF

“Gasoline and crude-oil prices have reached levels not seen since 2014 at a time when world oil demand is less than the pre-pandemic levels of 2019,” a Barron’s article said. “Unlike previous oil booms and busts, the rise in gasoline prices is due to a confluence of factors, many of which may seem familiar, but have not occurred all at the same time.”

“In 2019, world oil demand was rising, led by increases in jet-fuel and diesel demand,” the article added. “In the United States, gasoline demand had been rather flat since 2017, but that was of little consequence as the United States is connected to the world oil grid. Energy independence depends on where one sits.”

In the meantime, GUSH has risen over 57% in the last few months as consumer prices continue to head higher. Using the same 3-month chart, GUSH is well past its 50-day and 200-day moving averages, which could signal bullishness through the rest of the year.

Momentum is on the side of GUSH given its relative strength index (RSI) reading of close to 70, which could signal an overbought level. However, it’s stayed in the overbought territory for the last few weeks, so that reading could hold further.

Pain Translating to Gains for Traders

While consumers are feeling the pain at the pump, it’s translating into gains for oil and gas traders. Specifically, for GUSH, traders have been rewarded with a 185% gain on the year.

GUSH seeks daily investment results of 200% of the daily performance of the S&P Oil & Gas Exploration & Production Select Industry Index. The fund, under normal circumstances, invests at least 80% of its net assets (plus borrowing for investment purposes) in financial instruments and securities of the index, ETFs that track the index, and other financial instruments that provide daily leveraged exposure to the index or ETFs that track the index.