You are at:Home»Leveraged & Inverse Channel»One ETF to Play as Defense Industry Looks To Bolster Its Data Sharing 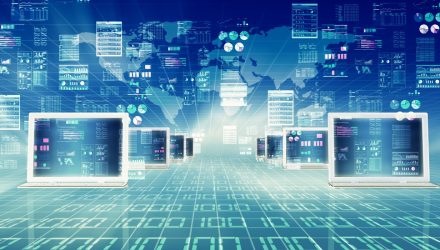 There could be a data-sharing race as opposed to an arms race in the defense industry, which could put the Direxion Daily Aerospace & Defense 3X Shares ETF (DFEN) in play.

We live in a world where information, more than a pile of destructive weaponry, is power. As such, military forces are looking to bolster their ability to share information over vast online networks.

“Just as consumers like headphones and other audio gear that seamlessly connects to their streaming data, future militaries will be more interested in weapons that quickly and intuitively connect to larger networks—more so even than high-performing weapons that don’t share data well, Northrop Grumman CTO Scott Stapp said Monday (August 9),” a Defense One article said.

At 15% of its assets, DFEN’s top holding is defense contractor Raytheon Technologies. Northrop Grumman is one of DFEN’s top 15 holdings as of August 30.

“The defense industry—and particularly, traditional prime contractors—are grappling with the military’s new insistence that they more freely share data: among weapons, over the new battle nets, to uniformed maintenance personnel, with Defense acquisition officials, and more,” the article added. “It’s the sort of change that will disrupt the way the contractors do business. Stapp said defense contractors will eventually stop fretting about opening their data silos and instead offer new software tools to combine and then use that data.”

“I think it opens a new model for the defense industry, which, in a lot of ways, looks a lot like commercial when it comes to data,” Stapp said.

Levering up Thrice in the Defense Industry

Bullish traders looking to lever up their positions on the defense industry can use DFEN as a tool. Of course, with its triple leverage, only experienced investors should use DFEN.