You are at:Home»Leveraged & Inverse Channel»President Trump on China Trade: “I Love the Position We’re in” 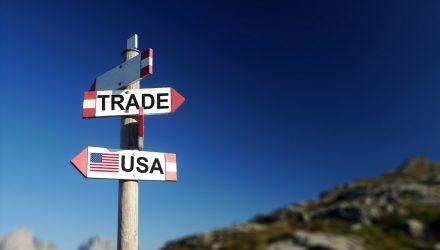 President Trump on China Trade: “I Love the Position We’re in”

With the Dow Jones Industrial Average off by roughly 2.25%, the S&P 500 down by 2.3%, and Nasdaq Composite down over 3%, President Trump announced that the latest round of retaliatory tariffs declared by China on Monday put the United States in an excellent position, and represent “a very positive step” in the ongoing trade negotiations.

China responded Monday to President Donald Trump’s latest barb in the trade war between the world’s two largest economies by threatening to hike tariffs on $60 billion in U.S. goods to as high as 25%.

The president seemed unfazed by retaliatory comments from Beijing.

“I love the position we’re in,” Trump said, adding, “There can be some retaliation, but it can’t be very substantial by comparison.”

“We have the right to do [tariffs on]another $325 billion at 25% in additional tariffs” on Chinese goods, Trump said, but he added, “I have not made that decision yet.”

The retaliatory moves by the Chinese followed the Trump administration’s move Friday to increase duties on $200 billion in Chinese goods to 25% from 10%.

“We’re taking in tens of billions of dollars” in tariffs, Trump said at a White House meeting with visiting Hungarian Prime Minister Viktor Orban. Trump did not mention that the tariff dollars are being paid by U.S. consumers, and not by China.

President Trump has remained sanguine about the trade tensions with China, but is prepared to do battle with China.

In the meantime, investors can take advantage of the latest dip in Chinese equities as a buying opportunity for China-focused and inverse exchange-traded funds (ETFs).

One ETF to consider is the Xtrackers Harvest CSI 300 China A ETF (NYSEArca: ASHR) as a way for investors to gain exposure to China’s biggest, best and most authentic equities via the country’s A-shares. ASHR seeks investment results that track the CSI 300 Index that is designed to reflect the price fluctuation and performance of the China A-Share market. For a leveraged ETF play, the Direxion Daily Large Cap Bear 3X Shares ETF (BGZ) is an ETF that allows investors looking to participate in market pullbacks and selloffs, with selling stocks.