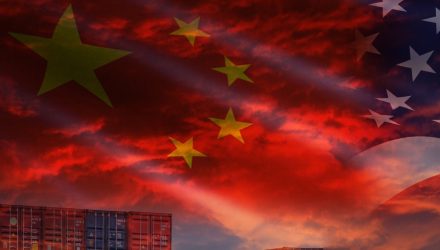 After a sizable selloff overnight, U.S. markets have recovered some today, on news that the White House will delay implementing the planned tariffs against China for another couple of weeks.

In the continuing telenovela that has become the trade war with China, earlier this month, President Donald Trump suggested he could hold off until after the 2020 election to reach a trade agreement with China. He added that he has “no deadline” to reach an agreement.

The U.S. and China are taking action to postpone the next round of American tariffs which is scheduled for Sunday, as they attempt to form a deal to rein in a raging trade war, The Wall Street Journal reported Tuesday.

Trade negotiators from the United States and China “are laying the groundwork” for the Trump administration to hold off on 15% tariffs on about $160 billion in Chinese goods, according to the newspaper. The U.S. and China have tried to restore a potential “phase one” trade agreement, a trade that would involve Chinese purchases of U.S. agriculture first announced in October. After continued vacillation and posturing however, the sides have failed to sign a partial deal.

Despite the tenuous situation however, most analysts, spectators, and strategists expect the U.S. to delay, if not indefinitely suspend, tariffs planned to go into effect Dec. 15 on $160 billion of Chinese goods, including smartphones and toys. “A tariff hike only makes sense if the Chinese have recently been provocative, which isn’t evident,” says Derek Scissors, a resident scholar at the American Enterprise Institute who focuses on China.

The unpredictability of trade talks has caused consternation to investors and markets however, especially with the S&P 500 up 25% so far this year. If talks break down and the tariffs go into effect, the immediate impact may be to lower forward multiples of 16.5 times earnings, compared with the S&P’s current 17.5 times, representing a 5% decline, since more tariffs will damage economic growth expectations, says Brian Nick, chief investment strategist at Nuveen.

The S&P’s dramatic selloff, recovery, selloff pattern over the the last week is evidence of just how much a failed trade deal could impact markets.