You are at:Home»Leveraged & Inverse Channel»Inverse ETFs Could Surge If Stocks Continue to Tumble 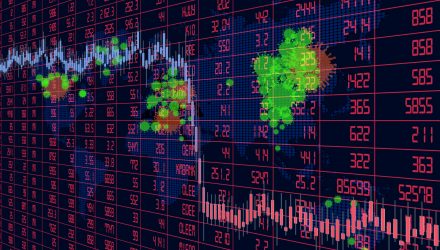 Inverse ETFs Could Surge If Stocks Continue to Tumble

Markets tumbled in overnight futures Sunday and throughout Monday’s trading, as political uncertainty related to Georgia’s Senate runoff election Tuesday catalyzed a precipitous drop in stock index ETFs. Now analysts are warning of more possible downside, something that could be good for inverse stock ETFs.

With a controversial phone recording from President Trump regarding Georgia in the news Monday, the runoff for two Senate seats is critical, as it could affect control of the U.S. Senate. If Republicans were to lose, there could more volatility in stocks, akin to what precipitated today.

Multiple Drivers of the Economic Pullback

Traders attributed the selloff to multiple causes, including concerns about the pandemic, with fresh shutdowns in the U.K., and the lagging distribution of the vaccine in the U.S., as well as heightened political risk that includes fears that Democrats could secure the Senate race in Georgia.

While none of the candidates had more than 50% of the vote in the Nov. 3 election, necessitating a runoff due to Georgia law, some Republicans also plan to challenge some states’ elections’ results, which could drive debate and votes in both chambers of Congress.

“It’s not surprising at all that you’re having this pullback,” said Julian Emanuel, head of equity and derivatives strategy at BTIG. “The question is when you look at the next two or three days, is it a catalyst for further pullback? … The market is concerned that Democratic control of the Senate would manifest itself as risk off. Given the fact that the market is so overbought … it wouldn’t surprise us to see a 10% to 15% down move in the near term.”

The news of a selloff is good for traders who prefer inverse ETFs, as it could yield a wind-fall, although not without significant risk.

SPXS seeks daily investment results equal to 300 percent of the inverse of the daily performance of the S&P 500 Index. The fund, under normal circumstances, invests in swap agreements, futures contracts, short positions, or other financial instruments that, in combination, provide inverse (opposite) or short leveraged exposure to the index equal to at least 80 percent of the fund’s net assets (plus borrowing for investment purposes).

Inverse ETF Trades and the Path Ahead

Trading in inverse ETFs is not without substantial risk, especially in a bull market that finished near its highs in 2020.

“I think the market has priced in the fact that at least one of these two seats is going to a Republican,” Cowen CEO Jeffrey Solomon said on CNBC’s “Squawk on the Street.” “The market definitely likes it where the executive branch and legislative branch are not in the same camp. If it turns out we get two Democrats elected, we’re likely to see some reaction to that … Irrespective of who controls the House and Senate, I think we’re going to see significant fiscal spend, and there’s going to be an infrastructure bill.”

Solomon predicts that a sell-off could create a buying opportunity.

Emanuel agrees, and he projects the S&P 500 to hit 4,000 this year after an early sell-off, which would be painful for inverse ETF holders.

“We knew all these things as risks on Dec. 31, and we knew them all for the most part of December, but basically people felt as if they wanted to be fully invested coming into year end,” he said. “The market tends not to respond until it’s staring right in the face. And that’s today.”

JP Morgan strategists also noted the possibility of a further drop in stocks, albeit in the short term.

“If there is a surprise, the knee-jerk reaction is likely to be a fall in [the dollar]and a bounce in bond yields. This might weigh on the overall market in the very short term, but it could also catalyze the next leg up in Value rotation,” the strategists noted.

For investors looking to use inverse ETFs, they can look to ETFs like the ProShares UltraPro Short Dow 30 (SDOW) and the Direxion Daily S&P 500 Bear 1X (SPDN).