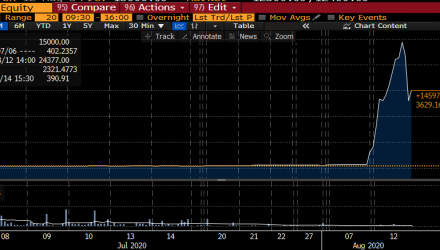 Over the past few days an interesting story has played out in one of the most irrelevant exchange traded products in history.  The product in question is the VelocityShares Daily 3X Inverse Exchange Traded Note (DGAZF), which is a note issued by Credit Suisse.  It, like eight other ETNs from Credit Suisse, was slated for delisting back in June, and this note in particular actually delisted on July 12th. At the time, I wrote about the move mostly in the context of the 2X Volatility ETN, TVIX, because it was larger (over $1 billion, vs. about $100 million) and was already a notorious problem child. Because delisting an ETP is the most outrageously awful insult an issuer can make to their investors, I bought one share of TVIX to prove a point and then spent a month trying to get rid of it after delisting.  You can read that saga here.

Turns out I bought the wrong ETN. Let’s break it down with Oasis Song Titles.

DGAZ(F) has led a pretty simple life.  Launched in 2012, it, like all Exchange Traded Notes, is a piece of corporate debt which, instead of making coupon payments, simply promises to pay a specific amount out when the note comes due in 2032. That amount-due is based on the result of daily resetting, negative 3X returns of Natural Gas futures. It doesn’t actually own anything, but presumably Credit Suisse manages a hedge against that promise to pay.  Every day, Credit Suisse degrades the amount they’ll end up owing in 2032 by an annualized 1.65%, which is effectively like an investment management expense ratio.  Credit Suisse doesn’t “get paid” so much as their liability decreases, which, if you’re a math nerd, is the same thing.

So what happened when DGAZF delisted? Surprisingly little.  NYSE stopped trading it, DGAZ changed its ticker to DGAZF, and it was picked up by the worst of three OTC markets – OTC Pink.  Pinks are the wild west: largely unmonitored, missing all the finery of listed markets (silly things like opening auctions and circuit breakers and rules about breaking bad trades).  It went from trading 100,000 shares a day or so to a few hundred shares a day, which is unsurprising.

But then this happened.

On essentially no volume, the live, trading price of DGAZF has shot from a net asset value — what the thing is actually worth — of around $125 to $25,000!  Cats and dogs living together! 40 days and nights of rain!? The twitter hyperbole has been intense, so lets explain what’s actually happening, and how it’s possible.

First: part of Credit Suisse delisting was closing the fund for creations.  That means that unless you already owned shares of DGAZ prior to delisting, the only way to acquire new shares was to buy them from someone else.  No market maker could create new shares to meet demand. Of course nobody expects any demand, just the opposite.  Previous delistings (and sister products like TVIXF here) generally trade below fair value, as investors who were napping under a bridge try to dump their remaining shares to market makers, who theoretically roll up blocks which they can present to Credit Suisse to redeem.  That’s what happened to TVIXF, which is currently trading at around a 10% discount.

But, and this is important, nobody really owns DGAZF.  At least not regular old investors:

This is the current readout on holders from Bloomberg.  You can see that Credit Suisse owns more of the ETN than exists — that’s inventory of shares they own.  [As an ETN, since they are holding both the asset (the ETN) and the liability (the promise to pay) they can actually hold this with no hedge.]  Most of the rest of the holders here are market makers who have functioned as the ETNs authorized participants over the years.  But there are also some trading firms here like GMT Capital Corp, which is a long-short equity hedge fund out of Atlanta.  But what your not seeing here is a lot of BofA, Morgan Stanley, Wells Fargo, Ameriprise and UBS – street names that would suggest more retail/advisor ownership.

What you also don’t see here, and what’s important, is who might be short.  But we know as of at least the end of July, that quite a few folks were short.  Here’s reported Short Interest as of July 31st.

Now before I lean in further, I’m skeptical of this chart.  Short interest is reported through exchanges, and I frankly don’t know the mechanics of how the short interest carries from one firm to another in a delisting.  Technically, member firms (brokers) report this directly to FINRA, and then this gets rolled back to the exchange, but let’s take this at face value: as of July 31st, there were 139,144 shares out short.

“Hung In A Bad Place”

Since July 12th, two things have happened.  The first is that the shorts were right.  The actual fair value of this 3X, daily resetting negative position in Natural Gas has collapsed from $311 on July 13th to last night’s NAV of $124!  In a normal world, that would mean everyone short could just go cover at $124 and book a monster, monster profit! But here’s the thing. In order to cover off that short position, you have to buy the shares from SOMEONE.  And this is no longer a market anyone is willing to play ball in.  This is now pink sheets.  So I think there are two possibilities of what’s happening.

The first is that this is all simply algos run wild.  Almost every trade is now happening one to five shares at a time.  Somewhere, there could be algos (probably at hedge funds) monitoring for big moves, big premia, etc., and they “found” DGAZF by virtue of these whacky price moves early in July, and now we have machines each trying to outbid each other on single shares because of erroneously measured momentum trading signals.  It’s certainly possible and we’ve seen it before.

The second, which strikes me as much more likely, is that someone here has an axe to grind.  Someone knows who’s short a big block of DGAZF. Let’s say your a small trading firm on the Connecticut coast, and you went into delisting with a 50,000 share short position.  Your exposure on July 13th was (at NAV), was -$15 million, give or take.  Over the past month, you’ve watched that liability collapse to -$6 million.  An enormous paper profit.  But what if someone who dislikes you knows this: a disgruntled ex employee, a competitor, or a guy you cut off on the Merit Parkway.  He knows you’re short, so he says “to heck with it” and sets up his algo to just keep buying single shares into the close every day.  On July 13th he successfully bids up the price to $500  – easy to do on the pinks, because there are no “erroneous price” breakers.

On July 13th, you think your exposure is -$6 million.  But your broker, who only cares about market prices, tells you your exposure is $25 million, and gives you a margin call.  You dutifully make sure you have the extra collateral, and you hang on.

Fast forward to yesterday, and your enemy runs his algo up to $15,000 a share at the close.  Sure, he might be out a little cash (although honestly, he can get a friend to just match trades in the pinks with him), but now he’s made your liability $750 million. That’s not a margin call. That’s a bankruptcy notice. And you have no real recourse unless you can find someone to sell you shares outside the pinks in a negotiated sale.  But why would they do that for you, when anyone left holding a share or two has been able to sell into your enemy’s program?

“No One Lives Forever”

Is this far-fetched?  I don’t think so.  Someone knows something here, obviously (my twitter DMs are open!  HNADIG on IB!), but there’s really no explanation I can come up with that isn’t either “algos gone wild” or “bankruptcy mill.”  It’s irrelevant at the moment because Credit Suisse has finally pulled the ripcord, and they’re accelerating the note.  They put out a press release last night saying they’ll hand folks back their fair value on August 25th and shut the thing down.

While this is “good” in the sense that it’s chaos reducing, the fact that they’re doing this ONLY with this ONE ETN, and not the other 8 they left hanging out to dry, shows a level of opportunistic avarice I just can’t fathom.  The damage here is done, but the other 8 funds are hanging out just waiting for more manipulation.  By singling out DGAZF for acceleration, they are making the choice to let the others ride, in hopes that by 2032, they expire worthless.  In other words, they’re hoping that — indeed counting on — all their investors losing all their money.

Heck of a way to run a business.