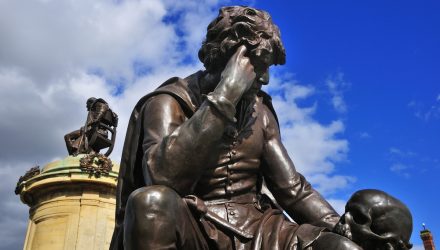 Looking Into The Tragedy of TVIX

Let’s back up.  The big product here, TVIX, the VelocityShares Daily 2x VIX Short Term ETN, launched on November 29th, 2010 under the VelocityShares brand.  One of the many quirks of Exchange Traded Notes is that they almost always involve two parties: a big bank, which actually issues the note, and a marketing partner who tends to have the brand and do the work of getting folks interested.  So despite the “VelocityShares” name on this product, the actual piece of debt a TVIX owner holds is just corporate debt from Credit Suisse.

TVIX’s stated goal is to provide 2X Long exposure to the S&P 500 VIX Short Term Futures Index.  Because of the endless and persistent tango in VIX futures over the past decade, this has been a terrible, terrible long term investment.

You’re not reading that chart wrong. The initial offering price of TVIX is now $2.8 BILLION per share.  This is because the fund has had to reverse split so many times because of declining share prices that just to meet listing requirements, it had to almost annually go 1-for-10 shares (2016 was unique, it had to split 1-25 then).  Despite this, the fund still sits this morning at $1.5 billion in assets under management.  That’s a lot of money.  So is the 1.65% annual expense ratio on the product — a cool $25 million in yearly revenue at these levels.

So with that backdrop, what’s going on.

The Worst Way to Exit

Credit Suisse has had a love-hate relationship with these products for a long time, and it’s understandable.  On the one hand, it’s a lot of money, on the other hand, the way ETNs work is that the note mathematically delivers on its stated goal, no matter what Credit Suisse does.  The indicative value of the note is driven by pure math, not implementation – Credit Suisse is on the hook for the implied performance of the note, period.  To offset the risk (of providing 2X long exposure to the VIX Futures index on 1.5 billion in assets), they need to manage an offsetting hedge on the books of Credit Suisse.  So somewhere, some poor soul is sitting on a risk desk managing the daily resetting trades for this rather huge VIX futures portfolio.  It’s actually a lot of work, and there are many ways to mess it up.

At times, Credit Suisse simply hasn’t wanted to do it anymore.  Back in 2012, they got cold feet and just stopped issuing new shares for a while, which caused TVIX to trade at massive premiums because people still wanted the product.  I’ve had this chart in a deck for seven years: 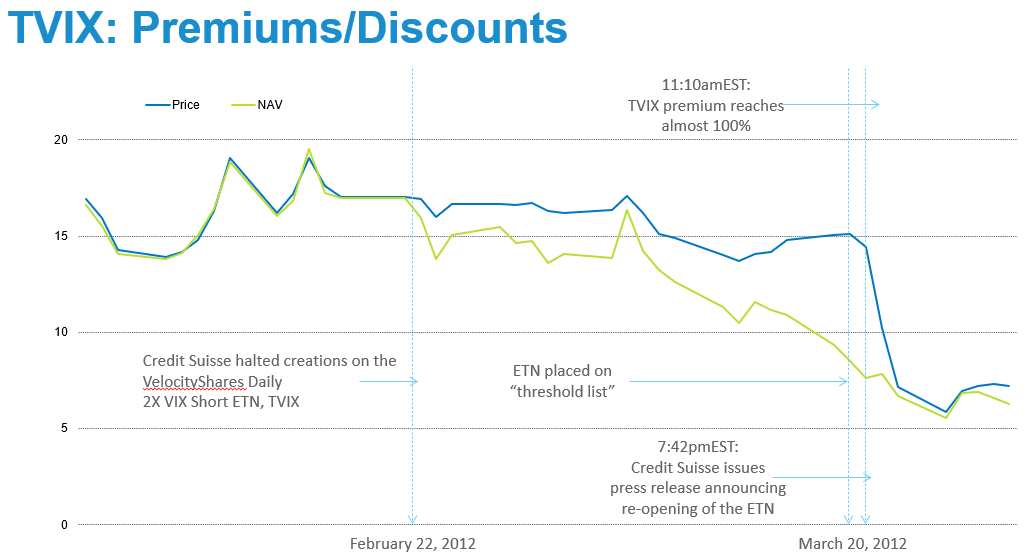 I don’t know precisely what happened (although I wrote about the potential shenanigans around leaked creations and so on back at the time).  It’s inevitable people got hurt when they suspended creations, because *someone* was buying at those inflated prices, and got wiped out when Credit Suisse changed their minds.  Needless to say, nobody will talk about it on the record.

Fast forward to this morning, and apparently, they’ve decided — again — that while they really like the $25 million in annual fees, they really hate managing the hedge.  So now they’re not only suspending creations of new shares (meaning the fund won’t trade at anything like fair value again, except by accident), they’re also delisting TVIX and all of its siblings.  Here’s the press release.   But just to reiterate what it says:

What this means, practically, is that if you hold the notes in your account on July 3rd, you only have three options ever to unwind that position.

I know a bit about this because Credit Suisse did this exact same thing once before in 2016 with their 3X oil ETN, UWTI.  I bought ten shares and tried to ride it out.  Eventually, I dumped it on the pink sheets for 10% below fair value and considered myself lucky.

So Option 1 means taking a big haircut.  Option 2 is almost certainly the worst option, but what about option 3.  Some ETNs contain early redemption privileges, and TVIX is one of them.  ETNs don’t have prospectuses; they have “Pricing Supplements,” which are even harder to read.  Here’s TVIX’s.  And here’s what it says you can do to get your money out early:

Sounds easy enough, right? This is a mechanism, usually, for Authorized Participants to roll up big blocks and then turn them in to get NAV.  Sort of like a last-ditch redemption arbitrage mechanism.  Usually, the blocks are huge, just like with any ETF redemption.  So with ZIV, one of the ETNs included here, someone has to roll up 25,000 shares to present to redeem.  Credit Suisse will charge you five bps for the privilege, and then a whole settlement mechanism ends up crediting them in cash.

But because TVIX has reverse split so many times, the basket size for early redemptions is … one share.  One single note, worth $161 as I type this.

We’ll see what happens.  Maybe when I call Schwab in two weeks to ask them to submit my single share for direct early redemption, it will all just work flawlessly!  It seems pretty unlikely Schwab and TD and everyone else are really ready to start processing thousands of individual orders, but maybe I’m wrong.

But the real problem here is this:  Credit Suisse is doing the single worst, least consumer-friendly version of “closing” that’s possible in modern markets.  They aren’t letting the product go (because $24 million in fees is hard just to turn off), instead they’re sending individual shareholders into purgatory, trapping their money into an arcane system nearly guaranteed to be suboptimal.  Eventually, TVIX will actually disappear.  But until then, Credit Suisse has chosen the crassest, most cynical version of “closure” available to them.

It is, honestly, shameful.

So what SHOULD happen here?  It’s pretty simple.  Credit Suisse should just do the right thing and wind up the notes, sending cash back to all their shareholders. That’s the stand-up thing to do.

And brokers?  Well, if I was working in the ETF due diligence group at a major discount broker, I’d get a flag up on any transactions in these products ASAP, with instructions (or at least guidance) on how to handle individual requests for early redemption.