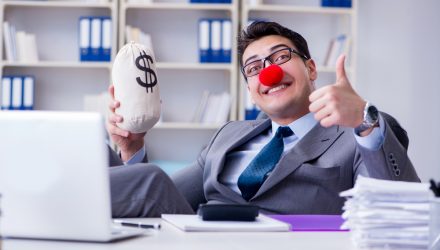 A Fool And His Money (A $TVIX Tale)

Way back in June (which admittedly seems like a year ago), I wrote a short piece on why Credit Suisse AG de-listing the VelocityShares Daily 2X Vix Short Term ETN (TVIX), was a terrible deal for investors.  It was notable because the ETN had $1.5 billion in assets, and I, essentially, accused Credit Suisse of wanting their cake and eating it too.  In this case, the “cake” is the implied management fee.

At the time, I pointed out that anyone dumb enough to be holding on was going to suffer one of three fates:

Because I am both curious AND an idiot, I bought a single share so I could ride out the storm of de-listing.

So it’s been a month.  How have things fared for each of these potential strategies?  Let’s take them one by one.

Sell on the Pinks

Most folks with lives are probably unaware that there are four distinct classes of traded-but-unlisted securities thanks to Reg NMS. OTCQX is where pretty-good stocks go to almost die – they still have requirements for minimum share prices and market caps, it’s virtually an almost-listed alternate trading venue.  OTCQB is the sort-of-garbage market, which has over 10,000 securities on it, but there are still some reporting requirements.  The Pink market (or just the Pinks), is the wild west. De-listed ETFs and ETNs tend to go right to the Pinks, as TVIX did here.  In reality, what that means is that volume dropped off a clip and spreads widened way out. 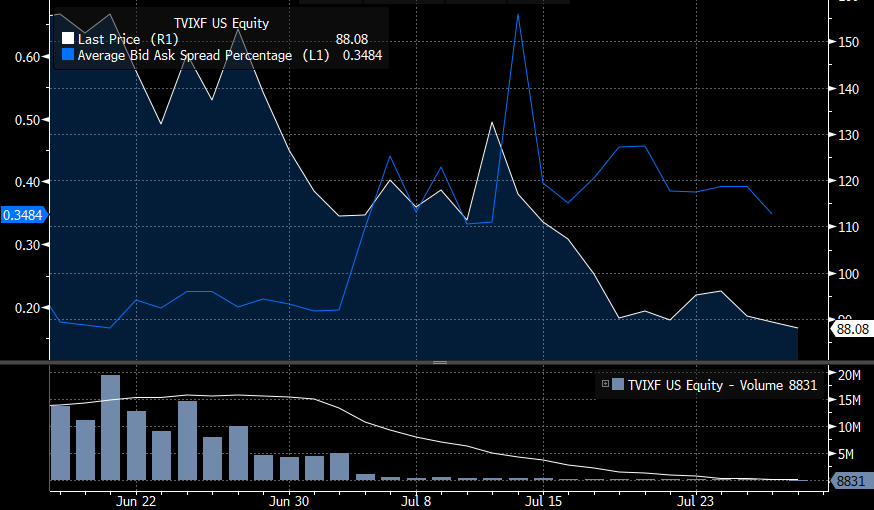 As the fund moved to the pinks after July 2nd, volume dropped from an average of 10m shares trading a day to yesterday’s volume of fewer than 200,000 shares.  Spreads widened from about 0.20% to about 0.40%.  I should point out that this is actually a huge victory.  Investors still hanging on have been able to get halfway decent prices, likely because the fund came to the pinks with so much volume and so many assets.  The other eight ETNs de-listed at the same time haven’t fared so well.  The 3X Inverse Silver ETN they canned (DSLVF) is trading a few thousand shares a day, tops, at spreads of nearly 5%.  But long story short, yes, you could still get out, before the volume completely dries up.

Hanging On For Dear Life

The second option I suggested was just to hang on until the bitter end, but that bitter end is already coming way faster than the implied maturity date of 2030 would suggest.  Since the announcement a little over a month ago, the actual fair value of TVIXF has plummeted from $164 on June 19th to $89 today. Despite the Vix dropping only from the mid-30s to the mid-20s. There are two things at work here.  The first is just the crushing math of how daily rebalancing affects you when your underlying is volatile (it erodes performance every single day).  The second is the contango in Vix Futures:

This is the current curve for Vix futures, and the implied contango to roll from the first month to the second month is 8.5%.  That means that if the curve held here, you’d expect to lose at least 8.5% every single month.  That annualized to a “cost” of 165% a year if I remember my MBA math, so you essentially will test Zeno’s Paradox well before your 12 months is up.  Of course, you’re still 2X levered to VIX, so along the way, if the VIX spikes back to 50, I guess you’re happy?  But a de-listed-and-forgotten ETN isn’t the right way to make that bet.

Redeem Back to Credit Suisse? About That…

The last option was the one I was most excited about. Because Credit Suisse has had to reverse-split TVIX so many times, the number of shares the pricing supplement says you have to redeem is exactly one.  One share.  So here was my chance to be my own personal Authorized Participant. I chose Schwab for my new career as an AP for a few reasons.  While I have accounts at most major platforms (just for observational purposes, mostly), I’ve had a Schwab account longer than any other, and I’ve thrown their support staff some curveballs before.  I gave things a week or so to settle down, then just picked up the phone.  The following happened over the course of two weeks:

Me: Hi I want to redeem one ETN back to credit suisse!  How do I do that?
Schwab (Customer Service Chat Window): I have no idea!  You know you could just sell this right?

At this point, the Customer Service rep and I walk through the relevant part of the TVIX pricing supplement. I won’t post all of it here, but there’s an entire handy how-to section called “How do you offer your ETNs for redemption by Credit Suisse?”  We both read through it together and they suggested this was something for Corporate Actions.

Schwab Corporate Actions: We have no idea what your talking about, but this is super interesting, we think this is someone in the Mutual Funds department.  But you know you could just sell this right?

Schwab Mutual Funds: Because this is issued by Credit Suisse, this has to go through our global desk.  But you know you could just sell this right?

Schwab Global Securities Desk: Yeah, this is super interesting.  We have no idea how to do this.  Let me send you to the ReOrg desk.  You know you could just sell this right?

Schwab ReOrg Desk: Give us a few days to research this (pause for two days).  Yeah, this is impossible, let me send you to a senior person on our Service Operations Support team.  You know…

Senior Dude at Service Operations Support: (gives me his full name, phone number and email address!)  This is the most interesting question anyones asked in years.  Give me a few days.

This brings me to this week, where, sadly, our tale ends.  The reason the story ends is that my very nice and brilliant Schwab rep spent real time on the phone with folks at the Depository Trust Company — you know, the place where Creation/Redemption and warehousing of security positions actually happens.  And Credit Suisse has filed no paperwork to allow brokers to do any of the things required in the pricing supplement (as far as Schwab or the DTC can figure out).

So alas, it turns out that it’s *impossible* to do the redemption of a single share here.  I suspect that if Schwab were already an authorized participant, they’d have access to different people/systems to make this happen. Still, as a retail account holder working through a retail broker-dealer, the DTC essentially says “nope” to processing redemptions.

Look, I get it, this was a bit silly. But until I went through the process, I had no idea where the bottleneck was.  Clearly, Credit Suisse didn’t anticipate anyone actually presenting single shares from a retail Broker-Dealer, and thus hasn’t done what’s required to facilitate this.  Given the absolute disdain — or perhaps sociopathic negligence — they’re showing for their investors hereby de-listing instead of shutting down in the first place, I’m not surprised by this at all.

There are a few morals to this story.  Know what you own. Monitor your positions for press releases and new filings.  Be careful with exotic ETPs that promise unusual patterns of return.

But to me, the biggest moral of the story is this: having a relationship with a broker is a good thing.  That’s not a ding on anyone. It’s merely a recognition that the folks who handle customer service desks at Schwab (and at Fidelity, and TD Ameritrade, and elsewhere) are real humans who, more often than not, actually want to do a good job, and often have just as much intellectual curiosity as you do.  It’s very, very easy in the modern world to just assume all our interactions are machine-based and thus inhuman.

I appreciate the dozen folks at Schwab who went on this silly little errand with me.  It gives me some hope that should I ever have a real problem, I won’t get left hung out to dry.