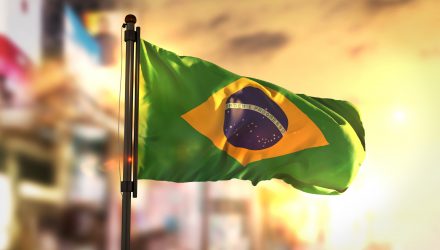 The Direxion Daily MSCI Brazil Bull 3X ETF (NYSEArca: BRZU) jumped by 4.54% as of 2:45 p.m. ET as the country’s presidential election looms, which will heavily impact the Brazilian markets and its economy moving forward.

Brazil’s presidential election is a tight one that features five candidates with no clear-cut favorite–Jair Bolsonaro of the Social Liberal Party, Ciro Gomes of the Democratic Labor Party, Geraldo Alckmin of the Brazilian Social Democratic Party and Fernando Haddad of the Workers’ Party.

Meanwhile, Brazilian-focused ETFs have experienced market doldrums like the VanEck Vectors Brazil Small-Cap ETF (NYSEArca: BRF)–down 25.80% year-to-date and the iShares MSCI Brazil Small-Cap ETF (NasdaqGM: EWZS)–down 24.35% YTD. With the triple leverage, BRZU has posted a loss of 57.20% YTD, but can turn its fortunes around should the newly-elected president be able to implement policies that are favorable to the country’s economy.

The Brazilian economy has been slogging its way to a recovery after it experienced its worst recession to date as unemployment levels remain high with double-digit figures and the country is drowning in public debt, which is currently equal to 74% of GDP. Furthermore, the local currency, the Brazilian real, is currently the third worst performing currency against the dollar–topped by only the Turkish lira and the Argentine peso.

While the annual GDP growth has posted positive gains as of late, it’s still not at a level where economists are optimistic about the future growth prospects. As a result, Brazil’s central bank downgraded their forecast for June’s GDP to reflect a 1.6% increase as opposed to the previous 2.6%.