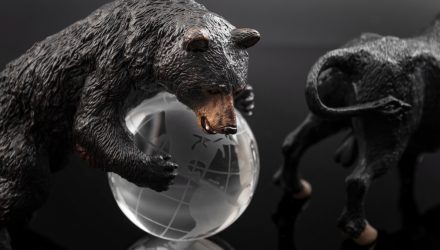 Bearish ETF Strategies for Investors Worried About Growth Ahead

As the Federal Reserve embarks on its interest rate hike plans, the bond market is already sounding the alarm for a potential recession ahead. Exchange traded fund investors worried about a slowdown in growth could turn to bearish or inverse strategies to hedge potential risks.

After the Fed raised rates on Wednesday and indicated further hikes at all six remaining meetings this year, a part of the Treasury yield curve, specifically the gap between five- and 10-year yields, inverted for the first time since March 2020, Bloomberg reports.

In other words, the short-term yields are trading higher than long-term yields.

“It is as if [Federal Reserve Chairman Jerome] Powell wants to sound upbeat but at the same time tough on inflation without signaling that this will ultimately end with a policy error and a risk of a recession on the back-end,” George Goncalves, head of U.S. macro strategy at MUFG, told Bloomberg. “Time will tell.”

This inverted Treasury yield curve has been a traditional indicator for potential growth pains ahead. The U.S. curve has inverted before each recession since 1955, with a recession following between six and 24 months, according to the Federal Reserve Bank of San Francisco. The inverted yield curve indicator only showed a false positive just once.

The last time the yield curve inverted was back in 2019. While the U.S. did enter a recession in the following year, the economic contraction was mainly due to the global COVID-19 pandemic.

With the Fed now projecting interest rates to hit as high as 2.8% by the end of 2023, bond traders are concerned that the tightening monetary policy could strangle the economy.

“The market is pricing in a higher recession risk and you can see that with the inversion between five- and 10-year yields,” Andrzej Skiba, head of U.S. fixed income at RBC Global Asset Management, told Bloomberg. “The Fed is sending a strong commitment to fighting inflation.”

For example, traders may wish to investigate the Direxion Daily S&P 500 Bear 3x Shares (NYSEArca: SPXS), which takes the -3x or -300% daily performance of the S&P 500.