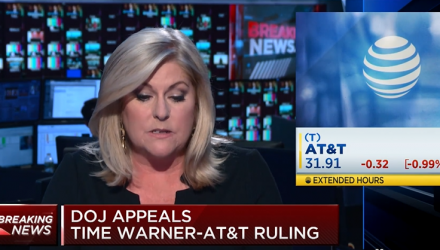 The landmark $85 billion AT&T-Time Warner merger that got the green light in June by U.S. District Court Judge Richard Leon is now getting a red light with the Justice Department filing an appeal, stating that the merger would decrease competition and unfairly drive up prices for consumers.

The news came less than a couple of hours after the close of Thursday’s trading session that saw the Dow Jones Industrial Average close over 200 points in the green. Meanwhile, shares of AT&T slipped more than 1 percent in after-hours trading when word of the appeal came to light.

As expected, AT&T General Counsel David McAtee was surprised by this latest development.

Back in June, U.S. District Court Judge Richard Leon deemed the merger legal and imposed no conditions, allowing the convergence of both media companies to take place. However, in a 200-page opinion, Judge Leon determined that the government was unable to establish that the deal would significantly decrease competition.