You are at:Home»Featured»JETS ETF Rallying On Mounting Airline Optimism 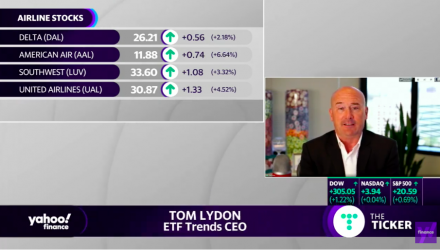 As the economy continues to balance efforts as far as reopening certain areas of the markets in phases, the airline industry may be ready to take off again, as airline stocks push higher on increased activity.

ETF Trends CEO Tom Lydon landed on Yahoo! Finance on Wednesday, speaking with host Akiko Fujita about airline ETF, specifically the U.S. Global Jets ETF (JETS), and what many investors may be looking forward to, despite doubts from some heavy hitters in the industry.

Click the image below to watch the segment on Yahoo Finance:

As Fujita notes, when it comes to airlines, some are saying it’s important to look at the value play right now. Whether or not airlines can bounce back all the way to where things were before Covid-19 hit, it won’t be lower than it is a year from now. With that in mind, Lydon has thoughts on how investors should be viewing it.

For U.S. Global, specifically, the JETS ETF had $30 million in it at the beginning of the year and passed $800 million just today. So, what’s clear is that airlines are not going away. If there is a prolonged recession or a shutdown preventing airlines from being profitable, many are banking that the government will step in and hold them up until people can get back to regular travel.

With that in mind, many have actually bet against Warren Buffet and have come out in the right. This includes 30,000 shareholders at Robinhood. However, things are still 30% off of the high. So, while things have come back from the bottom reasonably well, there’s still a long way to go.

In terms of how to view all of this in terms of opportunity down the line, Lydon explains how there are different ways to look at things. With the Summer months arriving, more businesses are opening up, and more people are on planes. However, the big question remains – what happens in the Fall, with the possibility of a resurgence of the virus taking hold.

“The bottom line is airlines aren’t going away,” Lydon reiterates. “It’s not like we’re going to shut down the airlines and start jumping on trains again. They’ll eventually have to come back, and the question is: Will they not be able to do it on their own? Will they have to have government support? Will they have to go through bankruptcy or loans? All those things will have the chance to happen at some point. However, all those who went in and bought JETS recently have been rewarded, as airlines have bounced off of the bottom pretty well.”

As far as the other ETFs people should be looking at and in this space and what to look out for goes, Lydon notes how JETS holds on to all of the major airlines, American, United, Delta, and Southwest, making up 50% of the portfolio. At the same time, the other aspects of the portfolio are made up of smaller airlines, as well as publicly-traded airports and airport servicing companies.

That said, with everyone being affected by the current state of affairs, interested investors could look into the airlines themselves to find a structure matching their sensibilities. However, with everyone being impacted, and knowing that air travel will return and get back to normal at some point, it’s a good diversification bet to continue looking at JETS or other airline ETFs, with hopes of an eventual rebound.