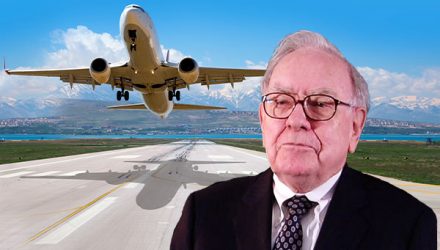 Why Buffett Was Wrong to Dump Airlines

By Frank Holmes, CEO and CIO for U.S. Global Investors

Warren Buffett is arguably the most respected and accomplished investor in U.S. history. He turned Berkshire Hathaway, a struggling textile company, into a multibillion-dollar holding company. Since 1987, Berkshire’s Class A shares have delivered an impressive compound average growth rate (CAGR) of 14.91 percent.

That doesn’t mean all of his investing decisions should be seen as gospel. He famously doesn’t like gold, for one. And in 2018, he admitted that he was wrong to underestimate Amazon and Google early on.

“I was too dumb” to recognize the opportunity, Buffett explained. He added that he and Charlie Munger, his longtime business partner, “miss a lot of things, and we’ll keep doing it.”

I believe we can add another misstep to Buffett’s otherwise successful career. This past week, the “Oracle of Omaha” revealed that he recently dumped his entire stake in the big four U.S. airlines—Delta, American, United and Southwest. As of the end of December, the position collectively stood at around $10 billion.

Buffett’s decision to exit airlines seems to have stemmed directly from the coronavirus lockdown and its impact on the travel industry. In other words, it had nothing to do with how the carriers were being managed.

“We were not disappointed at all in the businesses that were being run and the management,” the billionaire investor told Berkshire shareholders on Saturday. “The world changed for airlines,” he added.

While I agree with Buffett that the COVID-19 pandemic has been a challenge for airlines, I disagree with his decision to dump airline stocks for that reason. Few industries have escaped unscathed from the virus’ impact, after all. Berkshire is highly exposed to banks and insurance—banks are bracing for a wave of defaults and bad loans while COVID-19 could potentially bankrupt the insurance industry—and yet we haven’t seen Buffett cut Bank of America or Travelers from his portfolio.

I wouldn’t be surprised if his divestiture was also prompted in part by a general concern of the virus itself. Last week I shared with you data showing that the average age of deaths in confirmed COVID-19 cases is 82. Buffett will be turning 90 in August, putting him in the riskiest age bracket.

The truth is that few industries have been as resilient to external shocks as airlines. Between 2005 and 2008, about 70 percent of U.S. carriers were operating under Chapter 11 bankruptcy protection. But after a wave of consolidation and restructuring, the group turned highly profitable.

Before the coronavirus grounded jets worldwide, the industry was projected to net $29.3 billion in profits this year, an increase from 2019’s $25.9 billion, according to the International Air Transport Association (IATA).

Take a look at the chart below, which shows the growth in the number of commercial air passengers over the past 40 years. Growth slowed during economic downturns, but then quickly recover. In 2018, the most recent year of data, the number of people who traveled at least once by plane hit an incredible 4.3 billion. I’m certain that airlines will similarly weather this storm and come out on top.

There’s already evidence that a recovery in bookings is underway. The Transportation Security Administration (TSA) reported a big jump in the number of daily commercial air passengers last week. From April 29 to 30, the number of people the agency screened in the U.S. rose by 35,000, or 30 percent, to 154,695 people. That’s still 2.3 million below where we were a year earlier, but I see the increase as an encouraging sign that we’re well past the bottom.

“We’re requiring masks of our employees and our customers, we’re using very deep cleaning overnight [and]we’re using electrostatic misters which will kill the virus on surfaces for up to 30 days,” Kelly said.

I see the downturn in airline equities as a once-in-a-generation buying opportunity. That’s not just my opinion. In the first quarter alone, we saw record inflows into airline stocks.

These inflows appear to be by contrarian deep-value investors that are betting that the current depressed airline industry values will rebound following the coronavirus crisis. As 18th century British nobleman and banker Baron Rothschild is credited with saying: “The time to buy is when there’s blood in the streets.”

Compound annual growth rate, or CAGR, is the mean annual growth rate of an investment over a specified period of time longer than one year. It represents one of the most accurate ways to calculate and determine returns for individual assets, investment portfolios, and anything that can rise or fall in value over time.

Holdings may change daily. Holdings are reported as of the most recent quarter-end. The following securities mentioned in the article were held by one or more accounts managed by U.S. Global Investors as of (03/31/2020): American Airlines Group Inc., Delta Air Lines Inc., United Airlines Holdings Inc., Southwest Airlines Co.