You are at:Home»Innovative ETFs Channel»Roku Crushes Netflix and Disney In Streaming War 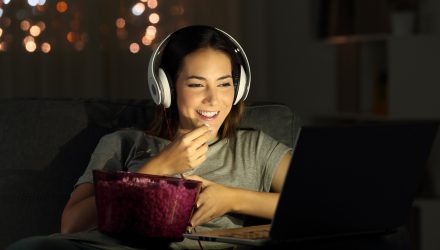 In a surprise turn of events, Roku, the streaming player company, has soared 173% higher this year, dwarfing Netflix’s 32% gain and Disney’s 20% gains.

Roku is currently trading above $80 per share, just slightly off its highs. Maley explained that to see the trend continue, investors should look for significant follow-thru above the October highs.

“You really want to see it be a more meaningful breakout before you can say the stock is going to be a lot higher and the reason why I think it probably won’t do that right now is the stock has had this huge move and it’s getting quite overbought,” he said.

“If you like the stock on a fundamental basis, that’s great but I think you’ll get a better opportunity to buy it at lower levels over the next couple of weeks rather than chase it way up here,” said Maley.

Mark Tepper, president of Strategic Wealth Partners, said Roku will benefit from additional competition in the online streaming space from Disney and other industry rivals.

“As more and more competition enters the streaming wars, that’s actually good for an aggregator like Roku. So what you have here is you have a company that was basically all hardware that’s now transitioning to ads and subscriptions which gets a higher multiple,” Tepper said during the same “Trading Nation” segment.

Tepper explained that the Roku can see even more upside in the future if it increases its average revenue per user, and can achieve top-line growth of 30% or more.

“As long as that happens, that would lead to some multiple expansion as well as growth, not quite to Netflix levels, but a reasonable expansion along with that growth takes this up to $100,” said Tepper.

Investors intersted in ETFs in the streaming sphere that hold Roku among others could consider: VTI, VB, VBK, IWM, VXF, ARKK, FDN, and IBUY.