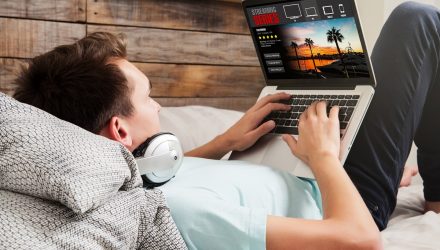 Shares of Netflix were up as much as 2 percent Tuesday at the market’s following the online streaming company’s news that it bested Wall Street expectations on earnings, revenue and subscribership for the first quarter.

Soon the streaming media giant is expected to report earnings on 07/17/2019 after market close. The report will be for the fiscal Quarter ending Jun 2019. According to Zacks Investment Research, based on 12 analysts’ forecasts, the consensus EPS forecast for the quarter is $0.56. The reported EPS for the same quarter last year was $0.85.

Netflix did address the entrance of new competitors to the streaming space with Apple and Disney joining the fray after the first quarter in a note.

“We don’t anticipate that these new entrants will materially affect our growth because the transition from linear to on demand entertainment is so massive and because of the differing nature of our content offerings,” Netflix wrote. “We believe there is vast demand for watching great TV and movies and Netflix only satisfies a small portion of that demand.”

Thanks to Netflix’s massive head start and nearly 150 million subscribers however, IAC Chairman Barry Diller believes it’s unlikely that any of the competing services will be able to overtake it.

Diller said in an interview Wednesday with CNBC from the Allen & Co. Sun Valley Conference, “No one is going to compete with Netflix in gross subscribers. I believe they have won the game…There’s nothing I can see that’s going to dislodge them.”

Despite Diller’s vote of confidence, Netflix still faces competition from up and coming rivals. WarnerMedia announced the name for its upcoming streaming service recently, HBO Max, and confirmed it will be the new home for the beloved NBC sitcom “Friends” along with new original programming. This means Netflix will lose the Emmy-winning comedy series come spring 2020.

“HBO Max will bring together the diverse riches of WarnerMedia to create programming and user experiences not seen before in a streaming platform,” said Robert Greenblatt, chairman, WarnerMedia Entertainment and Direct-To-Consumer, in a statement, according to The Wrap.

“HBO’s world-class programming leads the way, the quality of which will be the guiding principle for our new array of Max Originals, our exciting acquisitions, and the very best of the Warner Bros. libraries, starting with the phenomenon that is ‘Friends,'” Greenblatt added.

One of Netflix’s most popular TV shows, The Office, is also leaving the streaming service for NBCUniversal’s rival product in January 2021.

Last month, Netflix tweeted out the news. “We’re sad that NBC has decided to take The Office back for its own streaming platform,” it said.

For those investors looking to take part in Netflix’s streaming media growth,  the AdvisorShares New Tech and Media ETF (FNG) or the Invesco NASDAQ Internet ETF (PNQI) are 2 ETFs to look into.