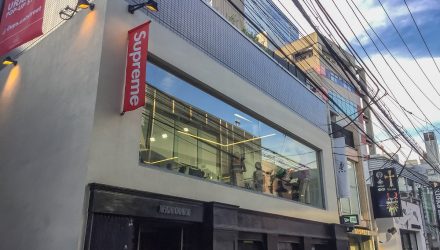 How Supreme Became a Household Name

Fashion and culture is constantly changing, and one of the recent trends of the past few years is the hypebeast or person who is particularly interested in doing what’s in vogue in order to impress other people, like buying cool, new shoes, snapbacks, or sweatshirts. One of the brands that has caught the attention of the hypebeast and run with it is Supreme.

Supreme is an apparel brand that began as a small and edgy New York City skateboard shop in 1994, and through viral word of mouth marketing and a product-scarcity strategy, it has grown into a global brand with a cult following with a billion-dollar valuation.

Like Yeezy’s and other hypebeast centered fashion, fashionistas have attached themselves to Supreme’s unique style, often generating long, spiraling lines of people, who camp out in lawn chairs all night, aiding Supreme’s items to skyrocket in resale value with sometimes quadruple-figure price tags.

According to Bustle, “Some people argue that a hypebeast usually uses other people’s money, typically belonging to their parents, older siblings, and so on; otherwise, meanwhile, claim that a hypebeast has an abundance of cash flow of their own that allows them to purchase such luxuries. It seems that poplar brands worn by hypebeasts include Stussy, Crooks and Castles, Supreme, Huf, Vans, and Alife.”

Supreme founder James Jebbia first justified their limited supply as a way to avoid shunned, residual inventory. However this has strategically resulted in dramatic sellouts of goods when new product lines are released. Frantic to get their apparel-fix, Supreme’s cult-like following of “hypebeasts” has purchased every obscure accessory from fire extinguishers to nun-chucks and crowbars, generating a global phenomenon that is spawning copycats and underground re-sellers.

“Accessories are what is always very interesting to me. They are always out of left field. They always surprise you. And there’s just a very collectible and a very interesting aspect about all of them,” said Joe Migraine, a consummate Supreme collector on CNBC. Joe’s collection has been valued at over $100k.

What is unique about Supreme is that it doesn’t spend money on fancy billboards or print advertising. The brand relies on word of mouth marketing from fans like Migraine.

Instead of focusing on marketing, founder Jebbia chokes inventory and makes every launch a huge event, capturing the attention of fans and hypebeasts everywhere. This has given Supreme surprising longevity.

So while some companies have seen this strategy fail after a period of time, Supreme has become deeply entrenched in the company culture, and continues to fascinate artists, fashionistas, and hypebeasts everywhere.