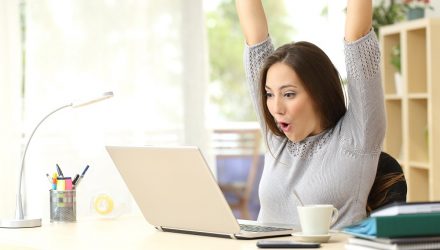 EBay Inc. shares are up 3 percent today after the company beat earnings expectations on Wednesday afternoon.

Ebay reported second-quarter net income of $402 million, or 46 cents a share, compared with $642 million, or 64 cents a share, in the same period last year. After adjustment for items like stock-based compensation and tax effects, among other things, earnings were 68 cents a share. Revenue rose to $2.69 billion from $2.64 billion in the year-ago period.

EBay stock has been a top performer this year, gaining 39% this year, beating the S&P 500 index which is up 20%. The American multinational e-commerce corporation is in the process of returning about $7 billion to shareholders via stock repurchases and dividends over the next two years.

Still, eBay’s growth prospects are dubious, as the company has struggled to hold its own with much-bigger rival Amazon.com Inc., driving it to offer new features for sellers and buyers and shift its image away from being primarily an auction site. The total value of goods sold on its site has also been languishing, dropping another 4% in the quarter to $22.6 billion.

As eBay’s growth has slowed, the company has sought profits from its advertising business and improve its payments system. On a call with analysts, eBay President and Chief Executive Devin Wenig said the company is making significant progress with the review, without providing more details.

The marketplace recently eliminated its third-party advertising network that permitted merchants to advertise on other sites so that the company could generate promoted listings on its own site. EBay said growth in promoted listings has helped stabilize its revenue as the value of goods sold has declined.

“Sellers are increasingly choosing to invest in promoted listings,” Mr. Wenig said on the call.

If eBay is able to maintain its market share (currently 6.1% of US market), it could be able to ride this momentous e-commerce wave and ideally take advantage of its prolific retail takeover. Still, the overly competitive space is making it difficult for eBay to experience the same growth though with  top competitors Amazon and Walmart vying for leadership in the ecommerce category.

For investors looking at ETFs with eBay, look to the PowerShares Nasdaq Internet Portfolio (NasdaqGM: PNQI) at 7.2% and First Trust Dow Jones Internet (NYSEArca: FDN) at 5.9%.