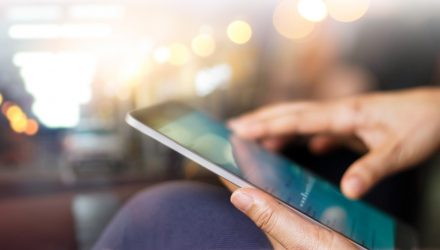 Apple (AAPL) Earnings Give Investors Reason To Jump In

Apple reported earnings for its June quarter on Tuesday that were above expectations, and the company’s revenue returned to growth after two straight down quarters.The stock surged more than 4% in after-hours trading, and is currently up $10 from its close on Tuesday.

Analysts were concerned about Apple’s China prior to the earnings release.

“Heading into this earnings report Apple has enjoyed the strong move. We’ve seen it jump more than 30% this year. It’s up more than 40% since it’s low in early January. And one of the important big questions for investors today is this: how is Apple’s business in China really performing?” said CNBC’s Josh Lipton.
Apple’s guidance was strong however, and beat analyst expectations, suggesting that demand for the tech monster’s products is stabilizing headed into the critical Q3 period of the year. In addition to strong earnings news, Apple also declared a cash dividend of $0.77 per share.
“We’re very excited to report a return to growth for the quarter, and it’s a record revenue for Q3 as well, best we’ve ever had,” Apple CEO Tim Cook told CNBC’s Josh Lipton.
“Great services quarter, unbelievable wearables quarter, significant progress on iPhone, and off-the-charts significant progress on China, compared to where we were the previous quarter,” Cook continued.
Lipton had expressed concern over Apple’s China entanglements earlier stating:
“Remember last quarter, Apple reported greater China revenue of $10.2 billion, and that was a drop of more than 20%. At the time CEO Tim Cook told me that he was seeing signs of improvement in China though, and specifically that the month of March, he said, was better than the average for the quarter. And for that cook credited price adjustments, his trade in program, and he called out easing trade tensions. But since then we know that trade tensions have persisted between the US and China. In fact, just this morning we saw President Trump tweeting that the Chinese, in his words, just don’t come through. So how does this really impact Apple’s business in China. Of course it’s a key market for the company. It’s a critical part of their supply chain. We’re going to find out in just a few hours.”
Investors looking to ride the upbeat Apple wave using ETFs can explore those that heavily weight the stock such as the Technology Select Sector SPDR Fund (XLK), which has nearly 17% Apple stock, or the Vanguard Information Technology ETF (VGT), which has roughly 15% AAPL.
For more investing news, visit ETFtrends.com.